The Mystery of Motherhood 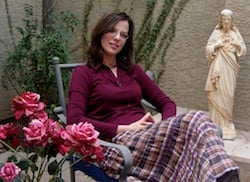 Editor's Note: Today, I'm very happy to announce that talented writer Sherry Boas joins us at CatholicMom.com as our newest contributor. You may know Sherry from her amazing fiction work with the Lily Trilogy. I know you're going to love her wonderful perspective on parenting and faith and hope you'll join me in welcoming Sherry to the CatholicMom.com family! LMH

The Mystery of Motherhood

Perhaps if we could see through the eyes of Heaven. Changing a diaper would look sublime. Burping a baby, transcendent. Taking a wiggly toddler to Mass, ethereal.

I think I once got a glimpse of what the angels see.

Our fourth adopted baby had just had his intestine repaired and was faced with the daunting task of learning how to eat from a bottle. John Anthony was born fifteen weeks early, at only a pound and a half, so learning to multitask -- simultaneously suck, breathe and swallow -- was not easy. It's such a laborious endeavor, that premies have a tendency to burn more calories than they ingest during any given feeding. I used to pray a rosary on the way to the hospital to give him his bottle. I prayed he would eat. And he did. He ate a little more each day, starting with a nipple full and steadily working his way up.

So I was shocked when the doctors told me one day that they were going to put John on a feeding tube.

"He only eats for you," she told me. "None of the nurses can feed him."

Well, I am half Italian. And you don't tell an Italian mother you are not going to eat. But I doubt John's willingness to take a bottle from me had anything to do with ethnicity. Nor did it have to do with biology. I did not carry and give birth to this child. But I knew, better than I know that the grass is green, that God had given him to me. And John somehow knew it too. How he knew it remains a mystery to me to this day, but it tells the story of every mother. The mystery of motherhood is that our lives sustain theirs. Physically, emotionally and spiritually.

So let the pundits debate the value of motherhood. Let the feminists decry it as a lesser calling -- inferior to changing the world through politics or science or art. The world will never fully understand the mystery of motherhood. And that's OK. To tell the truth, I don't either. I just know that there is at least one person on this earth whose life was sustained by my love. And I can't think of a higher calling than that.

The feeding tube ended up failing miserably. John stopped breathing when doctors inserted it. They removed it, resuscitated him and sent him home with the one person who could feed him, even though eating from a bottle is normally a prerequisite for leaving the neonatal intensive care unit.

John is now six years old and the best eater in the house. (And that's saying something, believe me.) I might have been put on this earth specifically so I could feed this child. Giving a bottle to a baby sounds simple, inconsequential and even mundane to the important people trying to change the world by enlightening the rest of us about what a meaningful life truly is. But if God ordained I exist to give even just an ounce of nourishment to one of his beloved, I wouldn't dream of asking anything more.

The Mass From Our Past
Read
Togather: A Fruitful Mealtime Game for Busy Families
Read
Holy Child 0-5 Ministry: Can You Help? by Kathleen Anderson
Read