How I Silenced Sister Mary Critical 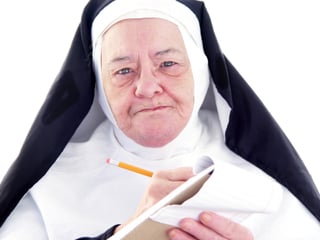 Do you have a voice inside your head that tells you you’re worthless at times? A tiny nagging whisper that eats away your self-esteem? You may not hear it all the time, but I’m willing to bet you know what I’m talking about. Even the most renowned writers, musicians, performers (and other creative geniuses) hear the voice of the inner critic.

I recently attended a workshop with Julia Cameron, author of The Artist’s Way and expert on the relationship between creativity and spirituality. Julia has an interesting perspective on the inner critic. She says the voice never disappears – it just perfects its manipulation skills as you succeed. Instead of saying “You’ll never publish a book,” the voice says, “You’re a one-hit wonder.” And when you publish the second book, the voice says, “Now you’re repeating yourself.” The voice continues to hurl clever insults despite your success. And Julia should know – she’s published 30 books!

But Julia has an extraordinary method of silencing the malicious voice. She spends some time getting to know her inner critic. That’s right – Julia has a name, a visual and a story for the voice that attempts to destroy her creativity. Her theory: it’s helpful in battle to know the enemy!

So I decided to give this method a try…I sat down with my journal and asked my inner critic to reveal herself. I challenged her to insult me and deflate my hopes and dreams. As I listed all her offensive blows, I began to form a picture of this evil voice. And I named her Sister Mary Critical. That’s right – the embodiment of all my self-doubt wears a cross and a habit with very sensible shoes. (No offense to the many inspirational and caring nuns who served as role models and mentors to me as a child!)

Something encouraging happened as I playfully wrote the story of this imaginary nemesis. As I described her in detail, I realized I no longer feared her reproachful words. I began to associate the voice of my inner critic with a woman who had no emotional power over me. And guess what! I realized I wasn’t in elementary school anymore and I didn’t have to listen to Sr. Mary Critical!

So now when I journal (or write copy for a client, or make dinner for my family, or register for a triathlon) and the voice of Sr. Mary Critical tells me I’m going to fail, I envision this pitiful woman and smile. I’m not threatened by her anymore.

Ready to silence your inner critic? Try it in your journal – write a description of your inner critic or draw or paint an image of her. Include as much detail as possible and have a little fun with it! I have a hunch you’re going to enjoy destroying the self-sabotaging voice with this simple character sketch!