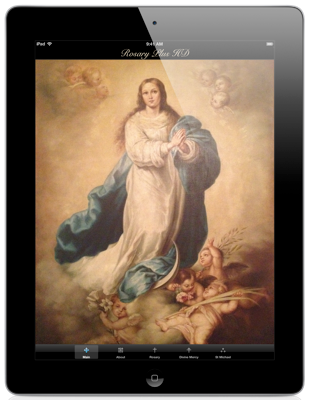 I met Bil Kimes after I reviewed the Novena to Mary app and he pointed me to the Stations for the Unborn app (which I reviewed a few weeks ago). Turns out Bil is just the kind of Catholic Techie we want to highlight, and he was game for a few questions.

Bil's involved with a number of projects, including St. Clement ePress, where he writes apps. (That sounds so easy written that way, doesn't it? I am not fooled.) He's also behind the St. Nicholas Project and he maintains his parish's (pretty awesome) website.

Obviously Heaven is my favorite pursuit!!! Other than that, though, the St Nicholas Project and pro-life work (which are really one and the same).

When you think of the New Evangelization from your approach as a "Catholic Techie," what excites you?

It's great way to reach a lot of people all over the world...how else could this be done??? The convergence of hardware, software and mega bandwidth has created an environment of practically one degree of separation from everyone all over the globe!

What makes you want to continue in your work?

Reaching MORE people! The Novena to Mary App has been downloaded in countries like Philippines, Malaysia, India, United Arab Emerites, Indonesia, Japan, Brazil, and a lot of Europe. People who may have never heard of this Novena are now able to pray it and benefit from its powerful effects!

We have a lot of additional ideas in mind for Catholic Apps (Catechism, spiritual classics in iBooks format (VERY EXCITING), Novenas, Prayer Cards & Litanies). One problem is they will need to comply with Apple guidelines. We have had a lot of rejections so far from the App store due to "no entertainment value."

If you look at the top 500 (or higher) listing of apps in the Apple App Store, it is dominated by games!  It is very sad but we live in an entertainment culture.

iOS mobile Apps via the App store is a great way to reach a lot of people all over the world. The Stations for the Unborn was a locally printed booklet from 1983 and a lot of the original people involved are dead! To be able to convert it into media that distributes it worldwide is an absolute thrill! I’ll bet Our Blessed Mother is guiding the whole project.

Do you have a gadget in hand or do you go native and screenless when you relax?

Basically since buying an iPhone and iPad they have become appendages. They can be extremely useful in organizing your life (Reminders, iCal, etc.) but not controlling it.