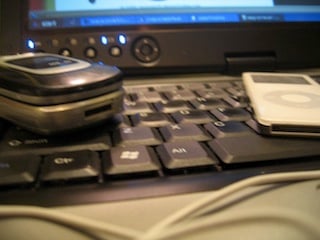 Though it feels like everyone has an iDevice or smartphone of some sort, the truth is that those of us who can finance a gadget addiction are probably in the minority.

But I'll bet most of us have a phone of some sort, and I'm not talking about the land line that you may still have in your house.

I've had a mobile phone for many years (at least twelve--and no, I'm not in the ranks of smartphone users). It's only been recently, though, that I've figured out the usefulness of the alarm feature.

Maybe it's that my kids are just starting to have their own lives and schedules that I can't forget about. Maybe it's that I'm not in front of a screen all the time anymore. Maybe it's just that I'm finally paying attention to what works for other people.

It's only been in the last few months that I've really used that alarm feature for my prayer life, thanks to Randy Hain's new book, The Catholic Briefcase. (I reviewed the book a few weeks ago.) He suggests stopping at set times throughout the day to go through a daily examen.

I modified his ideas to suit my needs. I stop three times a day, and I pray. I use my current prayer intentions, my needs of the day, and moment-by-moment inspiration to influence my prayer.

I stop mid-morning, early afternoon, and early evening when my phone sets off with my "prayer ring." When the alarm goes off, I try to close my eyes and actually stop what I'm doing. I put myself, however briefly, in the presence of God. Sometimes there's an intention that I'm holding particularly close to my heart, and I remember it then. Other times I just need a pause from the flurry of life.

It's amazing how this small practice of stopping three times a day, at the sound of an alarm, has enriched my prayer life.

YOUR TURN: How do you integrate prayer into your daily life? I'm especially interested in how you use technology... :)