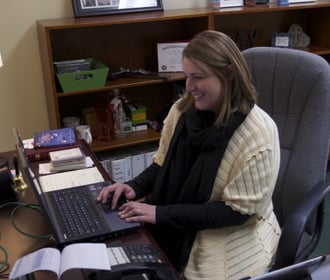 The school children, dressed in their Sunday best, sang songs of joy and love, witnessing an important milestone in their teacher’s life. Nicole Noverini, then known as Ms. Lagattuta, walked down the center aisle to make her declaration before God at Holy Trinity Catholic Church in Westmont, Ill.

For their teacher Nicole Noverini, having her students at her wedding was a lesson. Since the fifth-grade curriculum included sacraments, she wanted to have her community witness the Marriage Sacrament showing her students the importance faith plays in life.

She stood there 2 years and 8 months ago with husband-to-be Donald Noverini, at the altar to begin their marriage.

Today Nicole Noverini’s and her husband are still married and she is the principle/principal at Holy Trinity, where she is beloved by a new crop of students and also by their parents for her commitment to the students and education.

One of her top priorities as an educator is providing an “excellent academic environment,” said Pam Simon, the Youth Minister at Holy Trinity Catholic Parish, whose daughter was one of Noverini’s students.

Noverini’s commitment to teaching is blending academics with religious instruction.

“My youngest daughter had her last year and loved her. She got a lot out of Mrs. Noverini’s class,” Simon added. “She’s an excellent educator and inspires the kids to learn. So far she has taken that inspirational educator quality and made the transition to administrating the school as well.”

“When you look at academics there are certain skills that students may use more or less of,” Noverini said. Noverini said she provides her student opportunities to grow closer with God and to “know that God is always their for them.”

Noverini’s passion for teaching is rooted in her days growing up in a devout Catholic family, parishioners of St. Peter’s Catholic Church in Itasca, Ill., part of the Catholic Diocese of Joliet. Through her high school years at St. Viator Catholic High School, in Arlington Heights, Ill., Noverini was on a determined academic track. She also participated in sports, growing in her self-esteem and furthering friendships, she recalled.

At St. Viator’s, she had many opportunities that would eventually assist her in her future career. One of those opportunities she had was in her faith development was as a retreat leader.

Her classmates were not the only ones who witnessed her leadership. Even her sister, Emily Lagattuta, said Noverini is “a natural leader.”

Within her family, she learned about her faith and “the role God plays in my life,” Noverini said, crediting her family with teaching her to have a prayer life and importance of attending mass.

From 2005 to 2009, Noverini was hired for a job in her home diocese working as a religion teacher at Holy Trinity.

Noverini’s faith upbringing and her four years of teaching at Holy Trinity School had prepared her well as an administrator for her faculty. Since her faculty comes from various backgrounds, just as their students, she encourages them to grow professionally and in their faith, and to translate this to their students.

Noverini believes this is a great comfort to the students to have their teachers share their own faith growth.

Noverini believes her vocation in life is to teach children. Recently blessed to become a mother, Noverini showed she was called to show children the importance of faith, love, and family. When she became a mother Noverini discovered she wasn’t feeling just sympathy with her students but rather “it’s empathy that I can feel what other parents are feeling,” Noverini said.

Noverini’s family has been a source of inspiration for her throughout her faith and professional life, she says. Her parents were together for more than 30 years, showing the importance of love and to always work to be the “best we can be,” Noverini said.

Noverini’s says faith plays a role into the decisions she makes not only for her students but also in her own life. And while teaching is serious business, she also makes time for enjoying a few laughs with her sisters.

“We love to make each other laugh and find the humor in tense situations,” said Lagattuta.

In Noverini’s marriage and birth of her son, she has built up a faith community of believers. One of those community members is Cherisse Lagattuta, mother of Noverini.

“We spend time together playing, working, relaxing, and going to church,” Cherisse said.

Just as Noverini has been apparently been a source of inspiration and motivation to her students, it was the Catholic schoolteachers –when she was a child—who motivated her to be the person she is today, she says.

“I could just tell that there was something special about that environment,” Noverini said.