Spot Free Rinse for the Soul 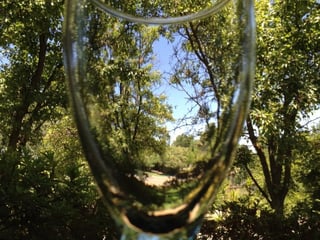 One morning a few weeks ago, I opened the dishwasher and thought, “Why can’t anyone learn how to load the G@# d#@n dishwasher!” Actually, I did not think that, I was reflecting on one of my father’s favorite phrases.

He was a proficient blasphemer and applied this skill to a wide range of topics. Railing about the dishwasher was perhaps his ultimate passion. I could swear that I heard this rant on a weekly basis as a child. Even as an adult, while spending a weekend at my parents house, my wife bolted from the kitchen where she was having tea and asked me in a hushed tone, “What’s with your dad and the dishwasher?”.

Thirty years on, it is starting to make sense to me. As a father of ten disorderly children, he must have thought that surely, he could have order in the six cubic feet of space inside the dishwasher. At least one space in the house could be orderly, logical and tidy. There could be a place where the smudged, greasy and filthy could emerge shiny and spotless.

The funny thing is that he seldom expressed anger or frustration over big things. He seemed to take poverty, poor health, and family crisis in stride, only to become enraged at the smallest of details. When I was in high school, I totaled the one week old family car. His response was calm and more than rational. “These things happen” he said, “At least no one was hurt”. Forty minutes later he flew into a purple rage because some one had left the lid off of the mayonnaise jar.

Now back to me, my dishwasher, my “load rage”. I expressed my displeasure about the state of the dishwasher in a way that was less profane, but every bit as heated. My wife looked at me, shaking her head and said, “Why are you turning into your father all of a sudden?” Good question.

We only have three children. I don’t recall that raising them was all that stressful. But now, after 12 years or so of an empty nest, we have moved into a house with our daughter and our three grandchildren.

It was my idea. After more than a year of shuttling them and ourselves from house to house, I said, “ Enough. Let’s just find a house big enough for the six of us”. Let’s just indeed.

After two months of living in a combined household, I find that most things are easier. Some things are much harder. Time management for example. Case in point; the previous paragraph was written over an eighteen-hour span. Midway through the second sentence, a book was thrust between the laptop screen and my face. “Grandpa, read me a story!” One thing led to another, but not back to writing until the following morning.

It’s sometimes hard dealing with three small children for long periods of time. During the summer, those periods are very long, Often from about 6:30 in the morning straight through until evening. Most days are fine, even pleasant, but some are difficult… very difficult.

A week or so ago was one of those days. It was a seemingly endless day of defiance, sibling arguments, fighting and all around mayhem. By the end of the day, I felt defeated. “How do we keep this up?” “It will be fine if we can just get through summer” I told myself.

The next morning, I decided I needed to go to Mass. I had not been in a few days. Was I going for spiritual reasons? Or was it just an excuse to get out of the house? I’m guessing both. As Mass began, Monsignor reminded us that it was the feast of Saints Anne and Joachim, the grandparents of Jesus. “Hmm… There’s a message here somewhere”, I thought.

Days later, I’ll admit I’m still not sure what that message is. I’m positive St. Joachim never had to put his grandson on time out. So what am I to learn from them? Perhaps I am meant to meditate on the faith that Anne and Joachim showed in the face of frustration. Perhaps the message is to lighten up, even if that means that I have little or no control of the dishwasher.

My five-year-old grandson put it in perspective for me just this afternoon. He was in the midst of some jolly rampage, interfering with the conversation my wife and I were attempting. My exasperation was obvious. He stopped for a second looked at me and said, “Hey, you wanted to live with us!”