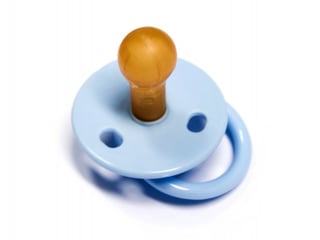 Mass with my three year old, Myles, was always a challenge, that is why my first prayer as I slid into the pew on Sunday mornings was one of thanks: Thank you God for the nursery.  However, on this particular day, we were at my daughters’ school for Mass, and I had mentally prepared myself all morning for the workout my energetic son was about to put me through. I had my arsenal of weapons to keep Myles at bay: crayons, coloring book, a few noiseless toys, Goldfish crackers, a juice box and, of course, nuk and blankie.

By the end of the first reading my arsenal had dwindled and I had to move to the big guns, nuk and blankie. During the Liturgy of the Eucharist, I decided to implore the strategy of distraction; I would distract him by focusing his attention on what the priest was doing, so I whispered in his little ear, “See the bread and wine the kids just brought up? They will become the body and blood of Jesus.”  To my amazement, this worked! Myles, for the first time in 40 minutes, stood completely still and stared at the alter.

For the next few minutes, he gazed intently at what Father was doing, and I gave myself a virtual pat on the back for my ingenious distraction technique.  Then, as Father brought the chalice up and drank from it, Myles, with a look of disgust loudly said, “Eww, does Jesus know he’s drinking His blood?” The eighth grade girls in front of us immediately began to chuckle, and the moms around me giggled.

As we headed to the door after Mass, one of the other moms, giving me that smile that revealed she’d ‘been there, done that,’ said, “You know, I believe God showers you with extra graces when you are at Mass with such a spirited child.”  It certainly is a nice thought, and if that’s the case, then I am comforted knowing that Mass with Myles is a drenching in graces!