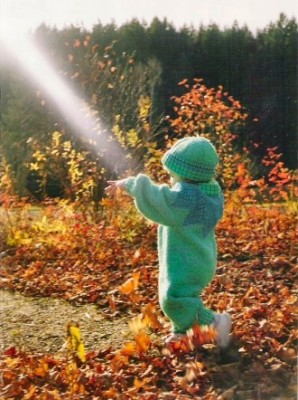 I’ve been praying a lot for patience recently, and not too long ago, the Holy Spirit arrived and charitably suggested that I had not a lack of patience but a lack of hope.

The Holy Spirit very gently let it be known to me that I mentally throw in the towel a hundred times a day.  I get frustrated and curt not because the four-year-old asks that I take off his shoes for him right as we get home from the grocery store and my arms full of bags and with my foot I’m trying to shoo the baby away from the giant box of candy cereal (that’s only for Mass) but because I am convinced that he’ll still be asking me when he’s in high school.  I lose my cool not because every utterance from the five-year-old sounds like a taunt, tease, or command but because I imagine her as a twenty-five-year-old telling her colleague, “Sue, make these copies for me and then we can take a break and pretend that it’s my birthday party!  What are you going to bring me?”  Mealtimes can pique my despair because I imagine the three of them, just as they are but bigger, smacking, dropping food, talking with full mouths, falling out of their seats, or crying as they sit with their families for dinner…oh, wait, I might do that now.  But, in any case, as silly as it is to write it down, in the moment of badness, it all seems so hopeless, like nothing will ever change.

So that’s my project for this week: in moments of extreme impatience, to recognize it for what it is in myself—a lack of hope—and make a little prayer asking God’s help for them to overcome whatever weakness it is that they are struggling with and then believe that He will.  New Advent offers the following definition of hope.  “Hope, in its widest acceptation, is described as the desire of something together with the expectation of obtaining it.”

Because if I as a mother have no hope in my own children, this all is for naught.  If I don’t believe in their ability to mature, with grace, then who will?  And what a powerfully dangerous thought: what if I do hope in them?  What if I do hope that with God’s grace they will blossom into mature adults, mature children of God, thoughtful, capable, and reasonable individuals?  Bright points of light who’d willingly reject our culture in favor  of helping God’s kingdom on earth flourish?  In short, saints.  What could happen if I hoped in their sanctity?  I don’t know, but I suspect St. Monica does.