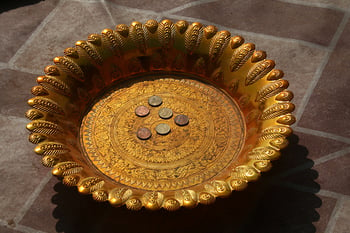 Even the king himself decided to make a showing of his wealth, and after much fanfare, he placed a chest of precious jewels before the sanctuary.  And the bells paid no heed.

But then, a little shepherd boy came forward.  He held in his hand a single apple, and he placed it beside the treasure chest.  He did not try to compete with the king and his gift.  He simply wanted to give God the best of what he had.

As soon as the apple touched the floor, the cathedral bells in the towers began to sing.  This humble shepherd boy brought God a lowly gift and God transformed it into a glorious hymn of praise!

This story of offering and sacrifice reminds me of a few other stories with a similar theme.   In reading about Cain and Abel’s offerings, Abraham’s willingness to sacrifice Isaac, Melchizedek’s offering of bread and wine, the story of the woman offering her single coin, and of course the young boy who provides the loaves and fishes to feed the crowds, we begin to see that through these stories, God was preparing us for the greatest sacrifice of all: the Mass.

So what exactly is a sacrifice?  A sacrifice is a visible, tangible gift that is offered to God through a priest.  When this gift is offered to God, it must be destroyed or changed in some way so that only God may receive it.  In biblical times, this meant that the lambs were slaughtered and burned, and the grain and the wine were poured out onto the altar, rendering them completely useless to humans.  This gift, now referred to as a ‘victim’, was for God alone.  And while the sacrifices may have not been perfect, they were still pleasing to God because of the intentions behind the gifts.

This is why God loved Abel’s sacrifice over Cain’s.  It was not that God preferred lambs over produce – it was because Abel gave God his best out of love, while Cain kept the best for himself.

The Mass is set up so that we too may still make a sacrifice to God as Abel did.  It is during the passing of the collection plate. The physical action of placing money into the basket is the visible gifting of the fruits of our work for God.  And the physical presence of the hosts and wine are further representations of what we have to offer Him.

While tithes may indeed be pleasing to Him, there is even something far better you could offer to Him at this time.  Yourself.  Your will.  Your desires.  Your dreams.  Your whole being.

Remember the boy with the loaves and fishes?  This was not a simple tithe that he handed over to Our Lord.  It was every last bit of food that he had.  Knowing his offering was not nearly enough to feed the crowds, he still held none of it back for himself.  And since God will never be outdone in generosity, He returned this boy’s sacrifice to the crowd thousands of times over, blessing them all.

Keep this in mind the next time the collection is taken up.  Do not thoughtlessly toss in your monetary donation into the collection basket.  Instead, hold that check in your hand and say a prayer, thanking Him for sending your family work and for making the donation possible.  Recall the sufferings you endured and the blessings you received during the week and offer Him those as well.

Deposit your money in the basket and tell Our Lord that while it may not look like much on the outside, it is a physical representation of your love for Him.  Then mentally place your will, desires and dreams in the basket, willing to let Him completely destroy all that you love the most and await to see what blessings He brings to you in return.  Place yourself before Him and allow yourself to be a victim for God, willing to be transformed in Him and therefore belonging to Him alone.

I assure you God will not reject such a loving gift, for this is what He desires most from all of us.  While offering our wills and entire beings to God may sound like an impossible sacrifice to make, rest assured it is the safest sacrifice to make.  Because when you freely give to Him the imperfect gift of yourself, in return, you will receive the body and blood, soul and divinity of His own Son in Holy Communion.  How can we lose?

We could never make up for the difference between the gifts we give and the Gift we receive in return, but with God’s grace, we could strive to make sure that each week we are a better, more loving gift to Him than we were the week before.  And while you may not be able to hear those distant cathedral bells ringing, as long as you focus on lovingly offering yourself completely to Him at each Mass, you can rest in the knowledge that your gift will indeed be pleasing to God.