"All Things Work for Good" for Teen Who Fought Cancer

Recently I had the opportunity to interview Peter Srsich and his mother Laura.

During his senior year of high school, Peter was diagnosed with non-Hodgkin’s lymphoma—a blood cancer that required weeks of painful chemo and radiation treatments.

In the course of our conversation, Peter mentioned that he was baptized in first grade, the same year his mother converted to Catholicism. He said they had growth in their faith together over the years, regularly talking about spiritual topics—sometimes in the car on the drive to school or sports practices.

It was clear to me that Laura—his “CatholicMom”—was a pillar of faith that influenced his life. She helped him build that foundation of grace and strength he so desperately needed during his battle with cancer—a time of great suffering.

Moms, I hope you are as inspired by Peter’s story as I was—and that you find comfort and confidence in knowing how important it is for us to help our children build a strong relationship with God—even when it just involves a quick conversation on the way to school.

Read about Peter, his struggles, the support he received, and the dream that came true for him through the Make-A-Foundation [hint: it involved a trip to Rome]: 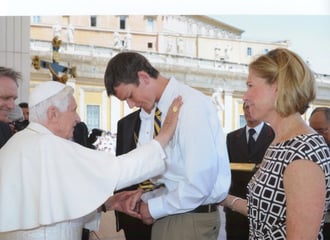 Peter Srsich lay sick in bed at Children’s Hospital in Aurora. The teenager’s pain was so intense he’d begun to lose hope. After weeks of chemotherapy for non-Hodgkin’s lymphoma, he was sinking into a depression.

Since entering the hospital, he had welcomed a friend and classmate from Denver’s Mullen High School who brought him the Eucharist. However, this day was different. Srsich had lost interest.

“I was totally wiped out, I didn’t care anymore, I had actually lost my faith at that point,” Srsich said. “I just didn’t even want to see him right there, especially with the Eucharist.”

When his friend lifted the host and said “Body of Christ,” everything changed.

“I could actually feel Jesus in the room,” he said. “It was like he was actually sitting in the room with me, and I could see that he cared about me, and that he was with me.”

Instantly his hope and faith returned. Within 24 hours, the painful sores that covered his mouth and digestive system cleared up and he was able to go home. It was this, and other blessings that helped Srsich get through seven rounds of chemo and 20 days of radiation.

The Mullen junior was wrapping up the school year in May 2011 when he developed a cough. Not thinking much of it, the 6-foot-6-inch, 200-pound honor student, lacrosse player, Eagle Scout and Taekwondo black belt went ahead with a two-week canoe trip.

Later, after being diagnosed with bronchitis, he continued his routine and attended a lacrosse camp.

“I was still coughing,” he recalled. “I felt exhausted. I started having trouble with day-to-day things.”

A different doctor suspected pneumonia and sent him for a chest X-ray. The X-ray didn’t show pneumonia; instead it revealed a softball-sized tumor in his chest.

“That turned my world upside down,” the now 18-year-old said.

The tumor was so large it was compressing his lungs and aorta. Srsich was rushed to the emergency room for test after test to determine the cause of the tumor. Due to its size and location, it took a week to diagnose: diffuse large B-cell lymphoma, a type of blood cancer…