Adam, Eve and the Christmas Tree 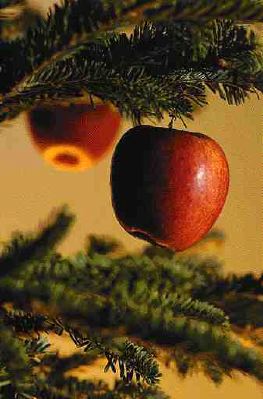 Last month I wrote of Adam and the animals. But did you know that the Feast Day of Adam is December 24th? And on that day the tradition of decorating a Christmas tree began?

While researching for a book, I was delighted to learn of the origins of this tradition and its relationship to Adam and Eve. The excerpt from that manuscript appeared on my blog, and I would like to share it here with Catholic Mom readers.

Adam lived in Eden, was married to Eve, and had one son that was a bad apple. Adam’s first son, Cain, was also a gardener, a ploughman who tilled the earth. While tilling the earth, Cain also was tilling greed toward his brother Abel. Adam was the second gardener on this earth; God of course being the first.

The name of Adam is said to be connected with the Hebrew word ha-adamah ("the ground") in a similar manner that in Latin homo is related to humus.  Both refer to him as being of the earth.[1] Adam was created not only of the earth but initially to attend to it in joy and recreation. The necessity of labor became apparent only after he and Eve had made a very serious mistake when it came to the Tree of Paradise.

This tree has its own familiar presence in our lives. In the tradition of the Eastern Church the feast day of Adam and Eve, whom they consider saints, is December 24th.  It was on this date that a Paradise Tree was decorated with red apples or quince that represented the forbidden fruit. At some point during the 16th century communion wafers were added to represent the Eucharist, the Fruit of Life. Shortly thereafter the Roman Church discontinued the Feast of Adam and Eve and eliminated the practice of the Paradise Tree, which then had been renamed the Christbaum or Christ Tree in Germany, which we now call a Christmas tree.

The tradition of a Christ Tree would not fade away from Catholic families, though some concessions were made to meet the directives of the pope. With the removal of communion wafers, the Germans created angels, hearts and stars from white pastry dough, in observance of those things from Heaven. With brown dough they formed humans and animals, those things of earth.

Eventually fruits and vegetables honoring the Creator’s creations were made from marzipan and added to the tree. For this reason in the 17th century the Christ tree was nick named the sugar tree, and it is no wonder that children waited in eager anticipation for disassembling it on January 6th...the Epiphany which marks the end of the Christmas season.

I love how Meredith Gould sums up this Christmas tradition “On this Feast Day of Adam […] we remember how the Creator is reunited with the Created through the Redeemer, Christ Jesus.”[2]

And with that, I would like to send all of you the gift of God’s choicest blessings for Christmas. May peace be always in our thoughts, on our lips, and in our hearts.

Every Friday I post a column at The Catholic Channel on Patheos. Additional Christmas columns can be found on my page Morning Rose Prayer Gardens. The first appeared on Friday, November 30th and is on the herb, rosemary, and its importance at the birth of Jesus. On Friday, December 7th, I  will share the symbolism behind Christmas greens.