Editor's note: If you haven't yet discovered the amazing artistry of Alessandro Brustenghi of Assisi, you've been missing out. Today, along with sharing this tremendous artist's gifts, we're giving our readers a gift: your chance to win "Voice from Assisi", the incredible CD by Friar Alessandro. Leave a comment at the end of this post to be entered to win. LMH 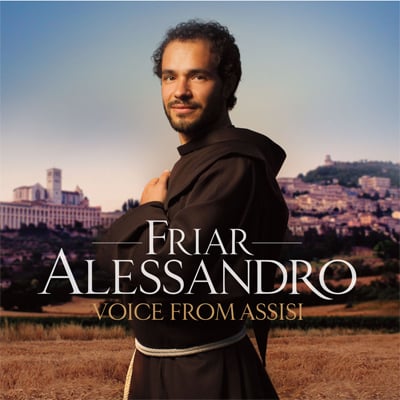 Alessandro Brustenghi – from the original friary founded by Saint Francis of Assisi, the Porziuncola in Assisi – made the headlines earlier this year when he became the first Friar in the history of music to land a major record deal.

The legendary Mike Hedges (U2, The Cure, Manic Street Preachers) and his manager discovered Alessandro whilst in Italy, after years of searching for “the next Italian Tenor”. Friar Alessandro has been singing all his life. Although music was always his passion, Alessandro received his ‘calling’ as a teenager, and at the age of 21 decided to become a friar.

Mike Hedges made the record at the famous Abbey Road Studios, and when Friar Alessandro flew over for the sessions it was the first time he had ever been on a plane. The album is a heavenly mix of traditional and modern sacred songs, including an original track by Royal Wedding and Christmas No.1 composer Paul Mealor, set to a prayer written by St Francis of Assisi, Le Lodi Dio Altissimo.

Also on the album is a song written by ‘60s singer-songwriter Donovon, Fratello Sole, Sorella Luna, from the famous biopic of St Francis (called Brother Sun, Sister Moon), as well as a recently discovered sacred aria by the Italian composer Vincenzo Bellini (who died in 1835), Tantum Ergo Sacramentum, here recorded for the first time.

To complete the collection are enchanting versions of The Lord’s Prayer (Pater Noster), Schubert’s Ave Maria, the popular Sancta Maria from Cavalleria Rusticana as well as the nation’s favourite hymn, Make Me a Channel of Your Peace – another prayer attributed to St Francis of Assisi.

By day, the Friar works in the Basilica of Santa Maria degli Angeli, welcoming many of the six million visitors to Assisi every year. In his spare time he works as a carpenter, restoring furniture and making wooden lecterns. Having taken a personal vow of poverty, Friar Alessandro will not accept any money from sales of his album and his day to day life will not change. Proceeds will go directly to the Order of Friars Minor for its charitable work.

Contest: To enter to win, leave a comment below by midnight pacific time on Saturday, December 8th, 2012. Five winners will be randomly selected to win "Voice from Assisi" by Friar Alessandro