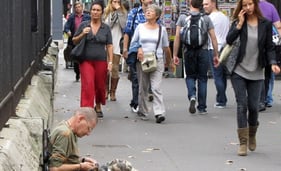 I have a Christmas gift for you today. I hope that this gift will tenderize your heart, and that you will unwrap the gift and you will use it. To my memory, I’ve only shared this story in a few homilies -- I did so in our parish this past weekend. I preached it then and there because the Monday following was going to be our penance service. If this story is familiar to you -- please do not let that interfere with the beauty of what is told here. Final note: this story has appeared other places. I claim no authorship of it - I just think it is so beautiful.

Most of you may know the name Scott Hahn. He is a great Scripture scholar and a Protestant minister who converted to Catholicism. Scott Hahn has a priest friend-- and the priest went to visit Rome. Among other activities, the priest was scheduled to have a private audience with John Paul II. On the appointed day, the priest had many hours free. And like a tourist, the priest decided to stop in a basilica to tour and to say a prayer. On the steps of the church were a number of beggars, something fairly common in Rome. On the steps, the priest thought that he recognized one of the beggars. After entering the sanctuary he knelt down to pray, and then it hit him. He remembered how he knew the man. The priest rushed out and approached the beggar. “I know you. Didn’t we go to seminary together?”

The man gave a nod of affirmation. “So you are a priest then?” he said to the beggar. The man replied, “Not anymore. I fell off the deep end. Please leave me alone.” The priest was mindful of his approaching appointment with the Holy Father. “I’ve got to go -- I’ll pray for you.” The beggar with the familiar face replied, “A lot of good that will do.”

With that, the priest left the beggar on the steps and departed for his meeting. These private meetings with the Pope are typically very formal. There are a number of people who have been granted a private audience at the same time, and when the Holy Father makes his way toward you, his secretary hands him a blessed rosary, and the pope in turn hands it to you. At this point, one would probably kiss the Pope’s ring and say something heartfelt, such as asking him to pray for you, telling him you are praying for him, or thanking him for his service to the Church. However, when Pope John Paul II approached, the priest couldn’t help himself and he blurted out, “Please pray for my friend.” Not only this, the priest told the entire story. The Holy Father, looked concerned, and he assured the priest that he would pray for his friend. As he moved on, he whispered something to an aide.

Later that day, the priest was cell-phone contacted by staff from the Vatican.  They told the priest that he and the beggar - the former priest were invited to see the pope for dinner. Excited and curious, he rushed back to the church where he last saw his classmate. Only a few beggars were left, and as luck (or grace) would have it, his former classmate was among the few.

He approached the man and said, “I have been to see the Pope, and he said he would pray for you. And there’s more. He has invited us to his private residence for dinner.”

“Impossible,” said the man, “Look at me. I am a mess. I haven’t showered in a long time... and my clothes ...” Sensing the gravity of the situation (and understanding that this beggar was his admission ticket to have dinner with the Pope), the priest said, “I have a hotel room where you can shower and shave, and I have clothes that will fit you.” Again, by God’s grace, the beggar priest  agreed. Later, they were off to have dinner with the Pope.

After quite some time, the beggar emerged from the room in tears. “What happened in there?” asked the priest. The most remarkable and unexpected reply came. “The pope asked me to hear his confession,” choked the beggar. After regaining composure, the man continued, “I told him, ‘Your Holiness, look at me. I am a beggar. I am not a priest.’

“The Pope looked at me and said, ‘My son, once a priest always a priest, and who among us is not a beggar. I too come before the Lord as a beggar asking for forgiveness of my sins.’ I told him I was not in good standing with the Church, and he assured me that as the Bishop of Rome he could reinstate me right then and there.”

The man relayed that it had been so long since he had heard a confession that the Pope had to help him through the words of absolution. The priest friend asked, “But you were in there for some time. Surely the Pope’s confession did not last that long.”

“No,” said his friend, “But after I heard his confession, I asked him to hear mine.” The final words spoken by Pope John Paul II to this prodigal son came in the form of a commission. The Holy Father gave the newly-reconciled priest his first assignment: to go and minister to the homeless and the beggars on the steps of the very church from where he just came.

Many people lose faith in God when they see evil and natural disaster in the World. They feel that, if God is really present or really loves us, He will not allow evil. This feeling becomes even stronger, when they see children and innocent people suffer. However, it is not God, but it is sin... including our sins, that produce evils in the world. Sin results from selfishness and selfishness causes hurt to others. Even natural disasters, which some people refer to as “acts of God”, are a result of our sins.

Remember what John Paul II said to the beggar priest: “I too come before the Lord as a beggar asking for forgiveness of my sins.” The pope bowed before the beggar in humility with full awareness of his own sinfulness.

Some hearing or reading these words have not gone to confession in too long. Some don’t believe they need confession. Some approach the newborn Christ Child with serious sin on their soul. Some have not been obedient to the teachings of the Church. Some haven’t been faithful to attendance at Sunday Masses. Some have participated in or cooperated with abortion or other grave acts.

Now dear friends, it is said that Pope John Paul II went to confession every week. Would that we follow this example, how many of us would be saints? How much we can lessen the effects of sin in this world.

By the time this is published, it may be too late for you to go to Confession before Christmas. If so, make Reconciliation your New Year’s resolution. Become as humble as a babe born in a manger... become as conscious of your sinful weakness as a pope. Go to Confession.

Going to Confession will bring the Christ Child into our midst in a profoundly beautiful and powerful manner. Blessings.

John Paul II: The Man, The Pope and His Message
Read
Inspired by the Poetry of Pope John Paul II
Read
Picking a Patron Saint for Your Family
Read