Falling In Love With A Vocation 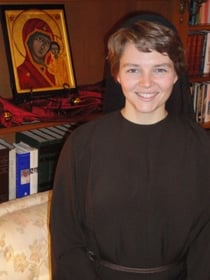 Editor's note: In honor of National Vocation Awareness Week and courtesy of the USCCB, we will be featuring guest blogs by young priests and religious this week. LMH

I met the Franciscan Sisters of the Eucharist in 2005 through my professor, a member of the religious community, Sister Lucia Treanor. She talked me into representing Grand Valley State University at a conference on the New Evangelization with her, despite my protests that she could find someone worthier.

This was the first time I ever experienced her religious order, and while the conference was powerful, I was more impressed and captivated by the community of sisters I met. They were real, vibrant and funny, not what I expected.

Over the next five years our relationship deepened. I took advantage of every opportunity to be with the sisters on their farm in Lowell, Michigan. From mucking the stalls to helping teach teenagers about human sexuality, I cherished every minute there. I found myself happiest and most myself when with them. I also attended several retreats given by the sisters on Pope Paul VI’s encyclical on birth control, Humanae Vitae, and the complementarity of men and women.

It surprised me that I learned the beauty of fruitfulness through celibate women. I took my strong response to the retreats as a sign from God that I was called to sacramental marriage. I was caught off guard when Sister Lucia asked me if I would be interested in attending a discernment weekend at their motherhouse in Connecticut. I remember my response, “I am honored. I would love to go visit the motherhouse, but I am not seriously thinking about a religious vocation. Can I still go?” I went, learned more about the community and grew in admiration of them. At the end of the weekend I felt frustrated because I had no more clarity about my vocation.

Another discernment weekend followed the next year but I was reluctant to go. I was tired of discerning yet did not want to pass up a visit to the motherhouse. I went to have a good time. God had other plans, however. I was there for about three hours when lightning struck. One second I was thinking about how amazing the community is, the next second thinking, “Oh my God, You want me to be one of them.” I have never in my life felt such panic or such peace. My entire future changed in that instant. Amidst the inner chaos was an overwhelming sense of “rightness,” of clarity. At one point the foundress, Mother Rosemae Pender, described discovering one’s vocation as falling in love, and I knew I was deeply in love with this community.

I am a novice now and could not be any more ecstatic about the direction my life is going. I fall deeper in love with God, the Church, and community every day. My vocation gives increased purpose to every aspect of my life: in prayer, in personal interactions, and, professionally, as a physical therapist.

I will never be a biological mother, as I once dreamed, but I have never felt more life-giving. This journey reveals that the plan God had for my life is so much greater than anything I could have possibly imagined for myself.

Sister Faith Marie Woolsey is a novice with the Franciscan Sisters of the Eucharist in Meriden, Connecticut.