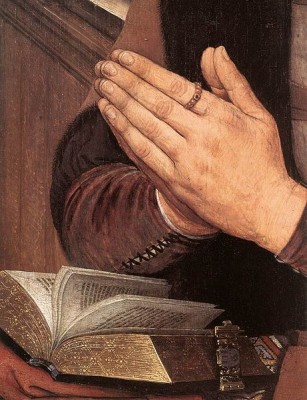 That’s a simple question, with a straightforward answer. But ignore this issue, and you’re in trouble. That feeling of restless anger or need, we can blame it on others for only so long. Until we are finally left standing in the mirror, asking, “What’s wrong? What could I be doing wrong?!”

That restlessness often arises from fear of man, or an unhealthy nervous fear of punishment, or a struggle with guilt that steals our joy, and quietly kills the celebratory nature of being human.

If you desire place of safety from the temptation of the world, then perhaps that is what God wants to teach you right now. But no peace comes without the hand-in-hand accompaniment of the meditative prayer modeled for us in the Psalms, and the intercessory prayer that unites and enables us to be workers in the gospel, warriors for one another, and servants to each other.

Prayer, according to Francis de Sales, is a spiritual discipline, that may start out bitter, but end up sweet. We don’t always feel like praying. But just as important as eating, sleeping, washing, and getting dressed, prayer is a discipline that if I don’t make time for, I’m useless.

I once read in a book of modern prayers from a leader of a small congregation. He said: “I can’t pray. I get distracted at the flies at the screen door. I’m like an old dog who wants to lie on the floor. I’m as dead as a gravestone, I have no feeling when I pray.” His honesty was refreshing, disarming, and I think meant to be humorous. But isn’t this the way we often feel? Again, I fail at this, and I can think I’m doing a good job, only to find out my intentions for prayer are far gone. If I fail, I can’t fall into weak-minded thinking and the kind of guilt that steals my joy and I’m back where I was at the beginning- not praying.

Again, should we abandon the practice for the sake of our perfectionistic pride? Of course not.

Let your mantra be like that of the monks- ora et labora.
Work- prayer-work-prayer, and on it goes.

The important thing is- keep praying. It keeps your work going!