Power up for Lent 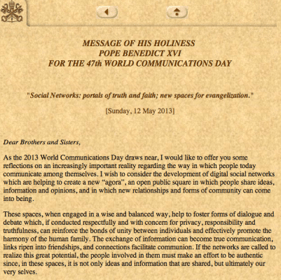 Power up for Lent

Post on Facebook. Send a tweet. Less than a month before Ash Wednesday Pope Benedict XVI has called on Catholics to get into social media. He blesses the world of Twitter, Tumblr, Pinterest and Facebook. He calls social media the new “agora,” the “open public square in which people share ideas, information and opinions, and in which new relationships and forms of community can come into being.”

For Pope Benedict social media is opportunity. A Lenten exercise for us may be to help social media be worthy of the papal endorsement. We need to sanctify the net. Here are some steps:

Go positive to counter the negative. The Web is filled with snide and snarky comments, so offer a counter balance. When you see meanness, an untruth or bias, gently correct for the record.

Pray for the nay-sayers and character assassins who hide behind anonymity. Writers marked by mean speech reflect inner pain.

Resist knee-jerk responses. Ask how someone on the receiving end will feel before flinging a verbal slice and dice.

Lent is a time for alms-giving so seek out worthy charities to which to donate. Catholic Relief Services’ Operation Rise Bowl is one. Catholic Charities agencies are always in need.

Share where you’ve seen God during the day and use pics. God’s there in the kids who make us laugh, the beauty of a flower, the images of love that touch our hearts. God’s also there in starving children and fragile elderly begging for help.

Research sites that help you pray. The U.S. bishops at www.usccb.org/bible offer daily readings from Scripture with a reflection. The Irish Jesuits at www.sacredspace.ie use simple music and reflections to draw one to contemplative ground. Share what you’ve found with friends.

Remember that how you say something may be even more important than what you say.

Converse with people with whom you do not agree and seek common ground from which both of you can move on.

Establish you own creed for social media behavior e.g. Don’t deal in put downs, think before you type, find something positive to contribute to the conversation, don’t text while driving and don’t text while someone is sharing real time with you.

Have the strength to power down. If social media get in the way of your relationship with God, family or friends, let yourself power down. Don’t check the computer until you’ve said good morning to God. Let the day’s last thoughts center on thanking God for his graces rather than a news flash from the Drudge Report.

Send a tweet to Pope Benedict at @pontifex and download his app to your cellphone or I-pad so you can easily check in with him for his wisdom.

Social media can touch hearts, notes Pope Benedict in the 2013 World Communications Day address. “When we are present to others, in any way at all, he says, “we are called to make known the love of God to the furthest ends of the earth.”