The Woman Saw that the Tree was Good

1 Now the serpent was the most cunning of all the animals that the LORD God had made. The serpent asked the woman, "Did God really tell you not to eat from any of the trees in the garden?" 2 The woman answered the serpent: "We may eat of the fruit of the trees in the garden; 3 it is only about the fruit of the tree in the middle of the garden that God said, 'You shall not eat it or even touch it, lest you die.'" 4 But the serpent said to the woman: "You certainly will not die! 5 No, God knows well that the moment you eat of it your eyes will be opened and you will be like gods who know what is good and what is bad." 6 The woman saw that the tree was good for food, pleasing to the eyes, and desirable for gaining wisdom. So she took some of its fruit and ate it; and she also gave some to her husband, who was with her, and he ate it. Gen 3:1-6 NAB 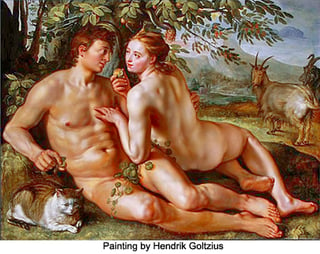 The Woman Saw that the Tree was Good

We often see depictions of Eve holding a shiny apple and talking to a snake as the single defining moment before the fall of man. We all have thought it.  Oh, if only she would have known! What was it that was so irresistible? When the serpent approached Eve for the classic set-up he asked her if God really told her that she couldn’t eat from any of the trees in the garden. Eve answered him. Maybe I should just stop right there. She not only answered him but she went into a full explanation. Did she ever wonder why she was even being asked or who this most cunning of all animals was? Some translations call him the most “subtle” of all creatures.

When she answered him, it is revealed that she was fully aware of the rules and the consequences that would follow if she broke the rules.  She knew she couldn’t eat or even TOUCH the fruit of the tree in the middle or she would die.  Even if the devil was too crafty for her, she wasn’t left without armor because God had left them with instructions. But we know the serpent challenges these instructions and tells her that if she eats of the tree, her eyes would be opened and that they would be like gods, knowing good and evil. She made her choice.

Before we throw Eve under the bus there is one more thing to consider. Adam was there. Art often portrays Eve alone with a serpent but verse 6 tells us, “…she also gave some to her husband, who was with her”.

Men have a calling to love their wives and lay down their lives for them. This means he must be willing to die for the sake of her salvation. They are created to protect and defend. But in this account, we behold Adam behaving in the complete opposite manner. Instead of putting himself between the serpent and Eve, he watched, perhaps with perverse curiosity, as Eve risked her life!  I believe that is why He had to answer to God first.

On the other hand, women have a certain influence over men because of our beauty and our nature. We can use it for evil or for good.  Men will often take their cues from their wives and either live up to the bar she sets or follow her into sin.

Eve used her influence selfishly so she wouldn’t be alone in her sin. “The woman saw that the tree was good for food, pleasing to the eyes, and desirable for gaining wisdom. So she took some of its fruit and ate it; and she also gave some to her husband, who was with her, and he ate it.” Gen 3:6 NAB

This verse shows us at which point exactly the woman started trusting her own eyes for what is beautiful and her own appetite for what is food and her own desires before God’s.  She “saw” that the fruit was “good”.  How could she have “seen” what we know was obviously not good?  Some translations have it as “delightful to consider”. Even in her pre-fallen state, she was obviously limited by her human senses to be able to know the depth of everything that is good and bad. That was God’s job. Hers was to trust.

In a way, the devil wasn’t lying, when he promised her that they would be like gods and their eyes would be open to good and evil.  We know that after they did eat it, their eyes were opened, for the first time, but not the way they had understood it. They were opened to corruption and disorder. They opened the door of shame and saw their nakedness. Did this make them like God? Hardly. They became “like God’ only in that they became their own gods.

Isn’t that just like the devil to give a half truth and then stand back and laugh when we fall in the ditch? Sin promises satisfaction but it delivers something else every time. It never disappoints.

Let’s consider the opposite scenario. Abraham was promised children when Sarah was too old to conceive. He accepted this even over his own common sense.  But it got more difficult. He was asked to sacrifice his own son. Some theologians say that maybe Abraham had some understanding of resurrection and was trusting God for this. Whether that is the case or not, we know he took Isaac up to Mount Moriah and was going to obey God even over his own desires. An angel stopped him and God provided a ram in Isaac’s place just like He provided His own son, the Lamb of God, as a sacrifice in our place. See, because of his Abraham’s trust he was blessed. Where Adam’s sin became our sin, Abraham’s blessing became our blessing because from his lineage we were given the Savior.

For what does the scripture say? "Abraham believed God and it was credited to him as righteousness. Romans 4:3 NAB

“But as it is written: What eye has not seen, and ear has not heard,   and what has not entered the human heart, what God has prepared for those who love him” 1 Corinthians 2:9 NAB