Around the country, the Catholic Church is celebrating Catholic Schools Week Jan. 27-Feb. 2. During the week, the USCCB blog will feature entries from people who reflect on how their lives were and are impacted by Catholic education. Today, USSCB Social Media Specialist Matt Palmer shares how Catholic schools prepared him for covering the NFL and now working in the Catholic Church. 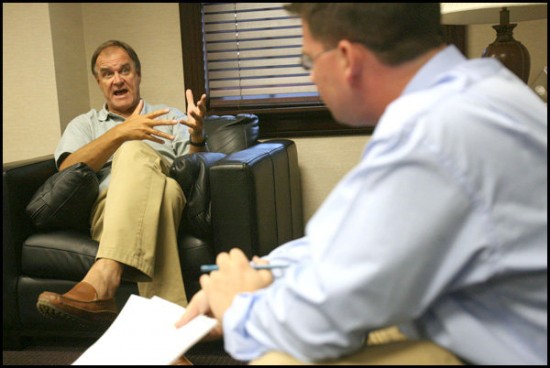 Super Bowl Sunday coincides with Catholic Schools Week. For many people, they might not seem to have anything to do with one another.

For me, it makes perfect sense. This Sunday, the Baltimore Ravens will take on the San Francisco 49ers in the NFL’s championship game. Five years ago, I walked away from my job as a reporter covering the Ravens to consider other career opportunities. Told as an early teen I was too small to play the game, I decided at 14 to become a journalist instead. It became my singular focus to be an NFL reporter and, by 2006, my dream was realized.

With the newspaper I was working for in flux, I decided to walk away and, at the age of 30, was unsure of where to turn. Throughout my career, I had pushed the boundaries with Internet reporting and blogs. My mother encouraged me to try something new: writing for Baltimore’s diocesan newspaper.

I grew up in a home where the Catholic newspaper was a staple. I’d flip to Catholic News Service’s movie reviews, while my mom kept up with the latest from the archdiocese. Our family was connected to our parish almost every day of the week. My siblings and I attended its school and I was an altar server. Yet it never occurred to me that one day I would work in or around the Church.

During my years at the Catholic Review in Baltimore, I found the transition relatively easy. So much of what I learned in Catholic schools aided in my reporting. I took a nearly rabid interest in social media while there and became convinced that using tools such as Facebook, Twitter, Youtube and audio players were crucial in sharing the message and growing audiences.

What has become apparent to me during my career in secular newspapers, Catholic newspapers and, now, social media is that my Catholic school experience paved the way for everything. Even though I grew up in the pre-Internet 1980s and early 1990s, my teachers at St. Jerome and DeMatha Catholic High School helped sculpt the whole person. The Sisters of Notre Dame de Namur at St. Jerome empowered us to share our Catholic faith in the world and to care for our neighbor. The Trinitarians at all-boys DeMatha taught us to be “gentlemen and scholars.”

There was one thread through it all: we were raised with discipline, strength, conviction and in the values of the Catholic faith. Those orders taught us to accept change and grow as people.

One image remains with me more than any other from the spring 1996 day I graduated from DeMatha. As I walked down the aisle clutching my diploma, I locked eyes with my mother and waved enthusiastically. Her eyes were were wet with tears. It hit home how much the moment meant to her, as she was also a product of Catholic schools. Mom worked as many as three jobs during my high school days. She’d often come home after midnight exhausted. Seven hours later, she’d get up again and take us to school.

She went to extraordinary lengths to send us to Catholic schools because she believed we would be better people for it.

When I graduated from DeMatha in 1996, my classmates voted me the most likely to return and teach. I laughed, but they were right in a way. Even though I haven’t returned there as a teacher, I’m in teaching, through the media that informs and can influence for good. Working with church media has the added benefit of letting me spread the faith in the marketplace of ideas and even to people who might not get to church when they should.

As the Ravens take the field for Super Bowl Sunday, it’ll be impossible not to think about my former life covering them and my professional journey since then, all enabled by my Catholic school education.

And, as a Catholic school graduate I’ll also do something else I was schooled in – pray for safety and good sportsmanship on the field.

Matt Palmer joined the USCCB staff in 2012 as its social media specialist.