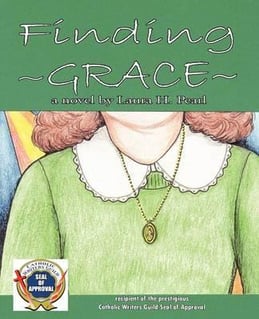 How can we ever measure the love in others' hearts, or truly understand their intentions, when so often we misconstrue their words and actions due to the faults and weaknesses in our own characters? - Laura Pearl, Finding Grace

Those wise words are the thoughts of Grace, the young sweet protagonist in this book, a girl not unlike St Therese of Lisieux, whose name appears quite a few times in the story. I fell in love with Grace, often wishing I were more like her.  Finding Grace is indeed a story infused with the presence of God and faith. It is the perfect book to give your teenage daughter.

The writing is clearly superior and attractive. It's a story of young Irish-American girl growing up in a beautiful small northern New York State town in the 1960's and 1970's.  The setting has a delightful appeal, slightly reminiscent of Beverly Cleary’s lesser-known teen books like The Luckiest Girl and Fifteen, that makes the reader wish it were a real place to visit.

Red-haired Grace Kelly is the youngest girl in a family of all boys, and the apple of her father's eye. Grace is mortified by her fancy name because she finds herself quite ordinary in comparison to Princess of Monaco and worries that others will do the same. Her father, the epitome of the Irish father-figure: jolly, affable, and with a twinkle in the eye, adores his daughter and makes no apologies for her name.  Grace's elegant mother is quiet and reserved in comparison, and the relationship in the beginning of the book is a little strained as mother and daughter try to find a comfortable balance.

The story starts out in the summer, before her freshman year at Saint Joseph's High School, when Grace, an avid bookworm, picks up a book on the saints. Inspired by talks with her father and by the lives of the saints, Grace determines to take up the personal challenge to become a saint.

Finding Grace is a nostalgic coming-of-age chronicle and love story that follows Grace and her best friend Irene, an effortlessly popular and languid beauty, and two boys through high school and beyond.  The culture of Plattsburg is definitely a Catholic one and the town is blessed with many Catholic schools and faithful nuns and a rich sacramental life. Although they are sheltered in their small community, they are not immune to the shifting attitudes that permeated the culture in the 1960’s and 1970’s and each character struggles with his or her own spiritual battles.

Tom, who is new in town, is endowed with natural good looks, physical ability, and a humble spirit.  He finds himself the object of both girls’ affections. His best friend, Sully, is plain in looks but charming and disarmingly witty, not unlike Grace’s father. Will his love for Grace be unrequited?

This book did not follow the typical formula for a love story and I found myself conflicted as to who would be the better choice and intimately drawn into each character’s personal battles. There were tender moments of grace and forgiveness and moments of dark brokenness. Topics like underage drinking, pre-marital sex, teenage pregnancy, abortion and adoption make an appearance throughout the novel. Author Laura Pearl did an excellent job of portraying the good and the sinful sides of each person and revealing very human and relatable characters. The characters had depth and complexity that were completely unpredictable and I loved it. Two thumbs up!

My only aesthetic concern is the book cover which I fear would be passed over in a book store or library. A more modern cover, in the style of teen novels today, would better appeal to the book’s target audience. Perhaps a sharp-looking photograph of the same subject matter (a red-haired girl in a green sweater donning a miraculous medal) would fare much better than the amateurish drawing that was used.

Order Finding Grace and support CatholicMom.com with your purchase