On the 40th Anniversary of Roe v. Wade: A Letter to My Former Pro-choice Self 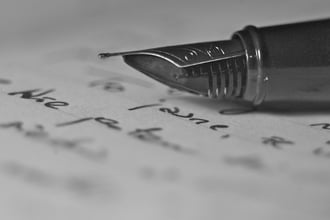 I’m writing to tell you something that will astonish you. You won’t believe me now, and even some of the evidence I present won’t stick at first – much you will have to gnaw on, hear again, dissect from many vantage points, argue with, and then hear again. You’re going to bark at me, I know. You’ll roll your eyes, and you’ll flash a snicker over what you believe to be hogwash. You’ll shake your head and get angry. You’ll probably even storm off. But I’m telling you, there is but a thin line that separates you and me, and all you have to do is see it for what it is. We’re not that different, and we both have good intentions on our heart.

You want what’s best for women — so do I. This is where you and I stand united.

But, while there won’t be some brilliant, life-changing moment like this person had — an aha experience that turns your entire worldview upside down and converts your heart instantaneously — you will undergo what will be the most powerful, radical, life-altering process, and you will look back and wonder, what the heck was I thinking then?

You will look at the pro-choice position squarely in the eyes and see it for what it is: wrong.

Please, take your hands away from your ears. I know it’s not the conversation you want to have. I know you think you’ve made up your mind. But I come to you in love.

Your position is not tolerant; it’s not pro-woman; it’s not acceptable. It is, undeniably, unjustifiable. You can’t hear the facts and turn a blind eye. If you do, you are no better than those who supported slavery and the Nazi genocide. To be pro-choice, frankly, is about more than personal opinion — it puts your soul in jeopardy.

No, I’m not being some hypocritical religious zealot. No, please stop saying I’m brainwashed by nonsensical mythology. I’m not imposing my views. I’m trying to explain something you’ve never heard — be a voice that is never represented in secular media.

So, please, if you can stop yelling at me, stop talking over me, stop throwing out these clichés and catch phrases and rhetoric you’ve heard uttered by politicians and celebrities, stop clinging to your political platform, and just listen to my argument, I think you’ll find there’re compelling reasons to consider the pro-life position.

I know you get annoyed when people say things like, “Abortion is murder; it’s killing an innocent baby.” But those who say it aren’t stretching the truth. They understand that life begins at conception when sperm and egg meet to form a completely unique, new life. That life is a human — not a dolphin or a goat. If given proper nutrition, the proper environment, and proper time, that life will thrive and the “pregnancy” will end on its own in the form of childbirth. So to terminate a pregnancy purposely doesn’t just end the state of being pregnant, it ends the life inside. And it’s never okay to kill an innocent human life, wouldn’t you agree?

Sure your body is involved, but it’s not just your body. The right to your body ends at the tip of another person’s nose. Claiming it’s just an embryo or fetus that’s being “removed” doesn’t disqualify that life from the human community anymore than saying, “It’s just a toddler, or it’s just a teenager” does. Fetus means “little one,” and it’s simply a phase of development. So when you say that an abortion merely removes a bunch of cells, can you see that your description would justify someone else using it to excuse murdering you?

Physically, we’re all a bunch of cells at various stages of human development. You always say you can’t stand all the pressure on women to be a certain look, a certain size. Aren’t you placing that same expectation on a fetus to look or be something it’s not? We don’t devalue 2-year-olds for their inability to reproduce, why hold it against an embryo that has just started forming the reproductive parts? We don’t devalue a baby who can’t eat solid foods, why devalue the fetus that’s just started developing the digestive system? If all men and women are equal, regardless of age, race, or gender, then what makes any of us before we’re born decidedly unequal?

Oh, it’s just not a person in the eyes of the law? Can we ever define the worth of another person? Do you really want someone else, or the state, assigning you your worth based on their opinion?

That’s what Hitler did.

That’s what the Dred Scott laws did.

That’s what the Rwandan government did.

That’s what Roe v. Wade did.

You’ll be shocked to find that the Supreme Court decision legalized abortion through all nine months; that the verbiage used in the segregation laws and Nazi propaganda is similar to the rhetoric touted by pro-choice activists, who claim the unborn are not human persons worthy of life.

Are you starting to see the hypocrisy of those who proclaim protection for children from sexual predators and gun violence out of one side of their mouth and ardently defend a woman’s right to kill her child out of the other? Is a child at 8 months gestation worth less than one who has been on the outside of the womb for one day? How can something that is worth nothing become priceless just because it travels six inches down the birth canal?

Our country has bestowed on women free license to kill someone they would otherwise protect with prenatal vitamins, proper nutrition, and regular doctor appointments if they “wanted” that child.

Don’t you find that curious?

You’ll learn the first feminists were very much opposed to the idea that a woman should ever feel compelled to turn on her unborn child, bullying and harming him or her just the way she had been suppressed by men. And you’ll start to be disappointed by misguided modern-day “feminists” — a term you never thought twice about calling yourself — when you realize they think reproductive rights are having the right to unlimited sexual activity without a live baby resulting, rather than having enough self-respect to hold men to a standard higher than lust.

You’ll start to see that abortion is one of the most degrading things ever promoted to women, and this will make your angry.

And this will make you uncomfortable.

Rape you ask? You’d be surprised to find that less than 1 percent of abortions are performed on rape victims – the majority are on women who just use it as back-up birth control.

This makes you mad as you question why women don’t just keep their pants on.

Regardless, how a child comes into existence doesn’t change its value. A woman who finds out her child was conceived by rape after the child is born has no right to kill that child, so why should she when she’s pregnant with the baby? There are two victims involved. Most women who are raped and decide to abort report suffering regret, as if they took out their pain on another innocent person, while women who have kept their child have reported feeling empowered by unity with their baby — mutual survivors who have the final say over violence.

You’ll realize that the true intolerance comes not from the right — which is always accused of “hate” in their protection of babies and family — but rather the left, which thinks the most innocent among us are worthless if the mother doesn’t want them.

You will realize that to turn a blind eye to the Truth because it means eating humble pie is to sell your soul to the devil. You will realize that a political party is not God nor are the politicians the Savior. And that is why you will, with a heavy heart, abandon the Democratic Party when you learn what it really stands for. It supports an atrocity, just as it did when it stood behind the slavery laws Lincoln aimed to end.

And then you will start to see a trend.

You’ll see they are eugenicists even if they don’t know what the word is, and this will make you shudder.

You’ll see they claim open-mindedness but are only open to their own viewpoints, that they are the quickest to use name-calling and insults and profanity to attack those trying to stand up for life.

You’ll start to realize that you’ve been standing on this side of evil, and you’ll feel ashamed.

You’ll feel sad that you have friends and family who literally think killing an innocent child is okay, despite all the scientific and moral reasons it’s not. And you will in your most vulnerable moments doubt any of their so-called compassion and empathy they claim to have for those on the outside of the womb — the poor, the disabled, the sick — because you’ll realize that if you don’t value life at all stages you can’t be trusted to value life at any stage.

You’ll fume over the hypocrisy and claim you want nothing to do with these people. Sadly, it will be hard for you to recognize any goodness in them. You’ll sense their hardened hearts, their close minds, their arrogance, and you will want to abandon them as lost causes.

And then you will remember… you were once them.