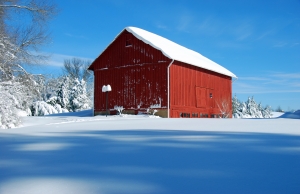 It is amazing what one person is capable of when given rough circumstances. God is there every inch of the way, we just don't always notice his presence until later on. The state of Connecticut recently got dumped with an average of 3 feet of snow. My husband spent all day Saturday trying to dig us out. He only came in for small breaks, such as, for a snack and for lunch. While working all the way until dinner, our neighbor was nice enough to give him a Bud Light for his hard work. Bud Light is at the bottom of the list when it comes to his favorite beers, but at the end of a long day of shoveling, he said it was the best beer he had ever had.

Now, I am not a big Bud Light fan either, so that statement really said something to me. We really appreciate the little things when we have hard times, work like crazy, and have God showing us there is a way out. It was tiring to watch my husband be the sole shoveler of the family, while my almost 4-year-old and I got off the hook. Though, I had to spend all day keeping my son from going outside to bother his daddy. My husband, Chris, was also a little under the weather, so spending all day in the freezing blizzard didn't help. My son, Linus, wanted a job and he wanted it now. Linus planned to shovel right next to my husband, but unfortunately, his little body and sand shovel probably would have been defeated by the massive mounds of snow.

After one trial comes another. Two days later, on Monday, February 11 at 4 a.m., I noticed water leaking into the bathroom during a nighttime bathroom run. I was already having trouble sleeping, so this situation made it even harder to return to my slumber. I awoke my husband to let him know what was going on and he was not pleased to hear such startling news at an early hour. He was planning on working from home, but instead he had to use vacation time to clean off our roof with a roof rake. It felt like I was saying, “I told you so,” which I may have in some form. But he was so tired and sore on Sunday, I didn't want to push the issue of him clearing off the roof all day.

The leaking has stopped since the roof being cleared. I really hope there isn't any major water damage. If there is, we are in serious trouble. I do feel like God was with us through all our trials today, as worried as I am about our house. God has blessed me with a wonderful husband, who will fight to save his family by shoveling us out and clearing off our leaking roof. As a mother, I am also blessed with a sweet son who loves my pepperoni pizza. God is always there, just not always in the way we would want or expect.