Like most American kids of my generation, I watched cartoons on Saturday mornings.  A friend and I were recently discussing one of the most enjoyable shorts produced by Schoolhouse Rock, Three is a Magic Number.  She pointed out how unlikely it would be for that video to be played on the Saturday mornings of today because a central part of its message included overtly religious lyrics, such as "Somewhere in the ancient, mystic Trinity, you get three...", as well as the now politically not-completely-inclusive "A man and a woman had a little baby...there were three in the family."   The song included the theological virtues of faith, hope, and charity among its lists of three.

Last week, as my kids and I were shopping for valentines, I became aware of a song playing on the store’s background music system.  It was Three is a Magic Number!  I silenced my kids as I hoped to share a piece of my childhood.  But alas, the lyrics had been altered.  The new version, performed by Jack Johnson, was from the soundtrack of the 2006 Curious George movie.   In place of the traditional images and the theological virtues that were included in the original song just one generation ago was the three word mantra "reduce, reuse, recycle."  Over and over.  In fact, it was the only three word list in the revised song.

Is virtue now measured in shades of green?

On a summer trip to California I was struck by the number of environmentalist messages I encountered in everyday places.  For instance, here's a glimpse of the kids' menu from a national chain restaurant: 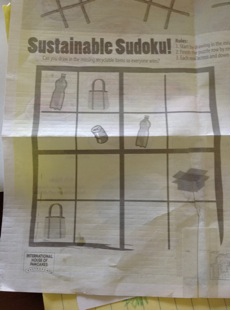 Sudoku made up of pictograms featuring four recyclables--aluminum cans, paper sacks, plastic bottles, and cardboard boxes.  Apparently teaching young children to count to four is too mundane.  Wouldn’t you love to see menus with kids’ games that teach virtue?  Even if virtue had to be disguised as “good character traits”?  (As an aside, my 11-year-old just said, “Sustainable Sudoku?  What’s that?”  Perhaps the game’s title is aimed more at adults than the kids playing the game?)

And this boast from an airline’s in-flight menu:

So, they're working to bring sustainable green energy to Peru.  Oops, that’s green with a capital “G”, to emphasize its importance.  As of 2008, the most recent statistics I could find, Peru's GDP per capita was about 10% of the comparable U.S. number.  It’s doubtful that the need for green energy, consisting of relatively expensive sources of power as presently available, tops Peru's list of current economic concerns.

The importance of clean air and water is readily apparent.  Being good stewards of the planet God gave us is commendable. Acts of ecological preservation can help with the development of virtue, insofar as they require controlling one’s desires and consuming less, or consuming in a way that is less convenient and less immediately fulfilling.  But in and of itself, recycling is not virtuous.  Wouldn’t it be nice if today’s media culture emphasized the teaching of actual virtue as pervasively as it now pushes the politically correct green agenda?