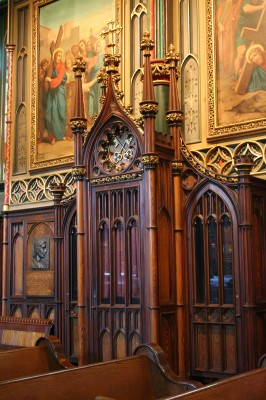 Last year, My daughter taught a religious education class to little ones who were preparing for their first penance and First Communion.

It was challenging to transmit so much information to second-graders on a Sunday morning.

Imagine the challenge of trying to explain sin and the need to confess!

The day after the parish penance service, my daughter led a discussion with her class. They were open and positive.

All but one child had used the confessional. Only one went "face-to-face" with the priest.

This little girl told the class that her siblings told her that she was the "bravest in the whole religious education class."

My daughter tried to affirm her choice without making the others feel as if they had done something wrong.

My daughter's first challenge was to keep from laughing. After that she had to help the class understand that both ways to go to confession were fine.

I thought of that incident as I imagined all of the cardinals gathering in the conclave to elect our next pope.

It saddens me that many in our beloved church do that to each other.

You're not committed enough to social justice.
You don't do enough to promote pro life.
You need to be more focused on the liturgy.
You need to keep our parish open.
You need to do more for ... fill in the blank.

At a religious education conference I had the chance to meet and interview Vatican analyst John Allen. He reports on all things Catholic and has a world view of the church.

He said that "the contemporary Catholic situation is much more complicated that a simple division of left and right. We are so badly fractionalized and people have come to see the church not as the common table of the Lord around which our differences dissolve; instead they have come to see it as the terrain upon which interest group battles are fought."

It is my hope and prayer that the conclave elect a pope who will build a big table where people might eat chicken but not call each other out as one.

Margaret Weber has been a Catholic journalist for 35 years. She also is the mother of Kerry Weber, associate editor of America magazine, and Matt Weber, of Catholic TV and author of Fearing the Stigmata. You can follow her at Twitter @spunfromtheweb.