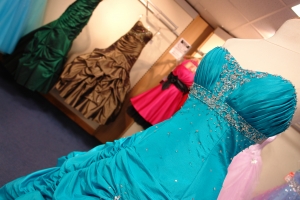 While so many people were absorbed in the Pope Francis news on March 19th, another event happened.

The Kerry Taylor auction house in Great Britain sold ten dresses that belonged to the late Princess Diana. The public bidding on the fancy clothes sold for a total of $1.3 million (862, 800 pounds).

It was reported that a midnight blue velvet gown designed by Victor Edelstein went for $362,563. The dress was worn by Diana at a 1985 White House dinner hosted by President Ronald Reagan where she shared a dance with actor John Travolta.

None of this news really got my attention or sent my blood pressure rising until I read the following line.

Kerry Taylor Auctions said the blue dress was bought by an unnamed man only identified as a "British gentleman" who wanted to "cheer up his wife."

Perhaps you heard me screaming that line out loud! I had just watched Pope Francis bless a disabled man in the crowd and talk about serving others.

I had just got my tweet from the Vatican that read:

“True power is service. The Pope must serve all people, especially the poor, the weak, the vulnerable.”

Now I understand that what seems costly to one person might seem reasonable to another.

I think $200 is a lot to spend on a dress. We have only had one brand, new car in our family. (Right now we have two, 1992 Camrys on the road with rebuilt engines).

However, I do not think paying $60 for tickets to watch the Red Sox play at Fenway Park is excessive.

But to read about a man buying a used gown from the 1980s as a “cheering up” gift made no sense to me on any level.

I want to call the couple up and say, “Hey, how about sending scholarship money to families in need – would that cheer you up?”

“Or think how far that money would go to help a soup kitchen or cancer research?”

And I am not with the crowd who want to sell the Vatican treasures. I support beauty and I think I would have understood if the man said he bought the dress to honor Diana or donate it to a museum.

Might I suggest a box of chocolates or a bouquet of flowers or a date night instead of an outdated dress?

I just hope that the dress did the trick and actually brought a smile.

About Peggy Weber: You can follow Peggy on Twitter @spunfromtheweb. If her last name is familiar it is because two of her three wonderful children are Catholic journalists. Kerry is an editor at America Magazine in New York City and Matthew produces “A Word with Weber" for Catholic TV and is the author of Fearing the Stigmata.