Reflections on the Father

If any readers happen to listen to our Catholic Vitamins Podcast, (www.catholicvitamins.com) you may remember Dee and I talking about a weekly (Year of Faith) Bible Study that we’ve been holding in our home. Each week - we use the upcoming readings for the Sunday Mass, and perhaps when you read these words, you’ll remember that on the 4th Sunday in Lent, we had the Gospel reading about the parable of the Prodigal Son.

After we prayerfully read the Gospel, I told those in attendance at the bible study that this is one of the weekends when I really, really, really wanted to preach. It isn’t kosher or a good idea to ask to preach, and so I hardly ever do it. But the reason I wanted to preach was because of my great love for the parable of the Prodigal Son.

A lot of my pent up emotion about this reading is because of a wonderful book by the late priest and author, Henri J. M. Nouwen. His book is called The Return of the Prodigal Son -- A Story of Homecoming and it was the result of Nouwen’s visit to Russia where Rembrandt’s original painting of the Prodigal Son is on display. Nouwen was privileged to have dozens of hours of personal and alone time to study the painting.

In his book, the Return of the Prodigal Son, Nouwen takes the painting apart to write about the scene and about each of the people in the painting. Let me give you two examples of Nouwen’s description of the Father in the painting. 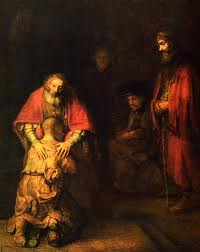 The painter Rembrandt displayed the two hands of the Father in welcome of the son who had just returned home. One of the Father’s hands is unmistakably feminine - the other hand surely masculine. Nouwen explains that the painter wanted to convey that God has the tender love of a mother ... can a mother ever forget (and not love) her child? And God is the Father figure - with a hand that is masculine and weathered from decades of work - but so much in love that he clasps the son he raised and gave example to from infancy. God is displayed both male and female in this small, almost un-noticed part of the painting.

Another amazing nugget about the Father is that he is depicted as nearly blind in the Rembrandt painting. Why would the painter show a depiction of God the Father as nearly blind? Nouwen said that when we repent and confess our sin, God is blind to our weaknesses and failings; he always celebrates our return to the home of his tender love.

There is so much more that I could share with you about all this -- but perhaps you have read enough to get you to consider reading this book for your end of Lent and Easter-tide period. Once again, it’s called The Return of the Prodigal Son - it’s available as a book or a CD-type audio book.

May each of us grow to know the love of the Father... whether we are certain or uncertain of our paths or if we’ve squandered the love and have left the straight and narrow.

MORE ON THE FATHER 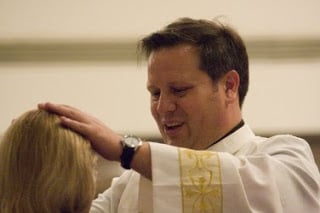 A priest we’ve interviewed on Catholic Vitamins is Fr. Stefan Starzynski. He’s written a book about healing - miraculous healing - and the healing of hearts and minds. His book is entitled: Miracles: Healing for a Broken World. Father also writes a column from time to time on his blog entitled LET THE FIRE FALL. You can find it through this link: fatherstefan.wordpress.com/

Fr. Stefan is a priest in northern Virginia and he himself is involved in a healing ministry. He has a beautiful soul and I’d like to share more about God the Father as told through a modern day parable. From a recent entry on his blog, here are the words of Fr. Stefan Starzynski.

I just got back from celebrating mass in the prison. The Gospel this (past) Sunday is about the prodigal son.

How many of these men there feel like the prodigal son?

In my homily I shared a story that I heard a priest give and it still brings a tear to my eye. Here it is.

There was a family that had a teenage son. The teenage son was into drugs, skipping school and breaking into homes. He had been in and out of prison.

On one particular night when he came home drunk and high the father said to him, “You are no longer welcome here.” You know how we all say things in anger that we wish we could take back.

The son responded, ‘fine, I will never come back” and he slams the door as he leaves.

21 years later, the son is on the streets, addicted to drugs and no job. He regrets leaving his mom and dad house. They have not heard from him at all in these many years.

He writes a letter to his mom and dad, saying he is sorry and wants to come home. He tells his parents that if he is wanted, they should put a light in the window. If there is no light in the window he will understand and not go in.

He picks up rides from here and there to get home. As he is about to pass the house he says to the driver of the car, “ I am going to lift my face from the car seat because I don’t have the courage to look to see if the light is in the window.”

As the driver of the car passes the house he says to the young man, “you are not going to believe this, you have to get up and look.”

The Love of these parents is a mere image of God’s Love for You.

God the Father, forgive me my sins, and I beg you to let me return to your love and to my homeland with you. Amen.