The Difference One Woman's Prayer Made in My Life

Henri JM Nouwen said that when the time comes, one of the great gifts that we can give to family or friends is to help them die well. Easier said than done, for those we love. I’ll come back to this in a moment.

As I work on this reflection, dear wife Dee is preparing to travel back east to attend the funeral Mass for one of our longest family friends. Her name is Barbara De Santis, and she and her late husband Frank were among our closest and most beloved families. They were godparents to our children, and while our relationship has been much deeper than meals - one of our long time memories is going to the De Santis home for holiday dinners. Barbara was a near gourmet cook and she loved experimenting. We were all-too-willing guinea pigs.

This relationship goes back more years than I care to enumerate -- Frank passed a couple decades ago. And a year or so ago, Barbara was diagnosed with esophageal cancer. She chose not to have any treatment and her end came in relative comfort amidst many hours of sleep. Most of us would say we were ready to tell Barbara that her end was here, and to go in peace. May her soul settle into God’s holy rest. The picture you see is of dear wife Dee with Barbara, and was taken about a year ago.

I don’t want to continue on the subject of death except there is another woman who died recently. Her name is Lucille Dupuis (Doo-pwee). She died on January 27th in Estes Park, Colorado. I miss her dreadfully -- she was a spiritual mother, a challenger to me and others. She loved all things Catholic, yet was a confidante and prayer partner and hostess to other Protestant groups. Lucille was formed by over 20 years of close association with Servant of God Catherine Doherty, foundress of Madonna House in Combermere, Canada.

Here is the beginning of my relationship with Lucille. Maybe sixteen or seventeen years ago, we were relatively new in our parish in Estes Park. I believe I casually mentioned something about possibly being interested in becoming a deacon.

Someone said, “You should call Lucille Dupuis.”

“Oh, she’s a holy woman who lives up on top of a nearby mountain. She’d be a good one to talk with.”

And so I called and went to visit Lucille. The twisting, precarious, single lane rock and dirt road to her self-designed wooden cabin was not for the faint-of-heart. We settled into her place, which she had named Our Lady of Tenderness, overlooking a beautiful and idyllic scene at 8,000 ft. elevation in the Rockies.

We talked for a while - mostly me sharing my journey up to that point. I remember saying to Lucille, “I don’t really know why I’m here.” She replied with a smile that spans countless years of forming people, “I know exactly why you’re here.” It took me a while to determine that it was a part of God’s holy plan for my life, and for hers as well.

Lucille Dupuis was a prayer warrior. She was an outspoken, loving, and very direct holy woman. Over the years, we had countless visits. When we lived nearby, she would come for tea and cookies and hours of conversation. She called me “Thomas” and I loved to hear her say that, even though I always solicit “Tom” from others who speak of or to me. As a pure coincidence, a few years after meeting Lucille, I was accepted into the Archdiocese of Denver Deacon Formation program. And wouldn’t you know it, the Archdiocese chose Lucille to lead our wives, and sometimes us men, in spiritual formation. One of the great things she taught us was the power of intercessory prayer for others.

Each month or so, even though Dee and I moved to Arizona, Lucille and I would enjoy a telephone conversation. Updates. News. Physical or spiritual challenges or successes. Lucille was as surprised as I was that Dee and I had gotten so much into new media work, including our Catholic Vitamins podcast. She was interested to hear about guests and topics.

Lucille had an amazing phone ministry, serving people from everywhere. How they would find her was similar to how I found her. And call they did. “Hello, I’m ‘so and so‘ from the Assembly of God Church in ______, and we heard you were a woman of prayer. Can we help you with any prayer support needs?” Lucille would smile in her heart and voice and a new faith relationship would be born.

Lucille was what is called a Poustinik - from the word Poustinia. It’s a Russian word for ‘desert’ and a poustinik is one who withdraws from the world as you and I know it. Lucille had three small, one-person poustinia cabins built on her property -- places for people to come and spend time in total summertime silence with the Lord. 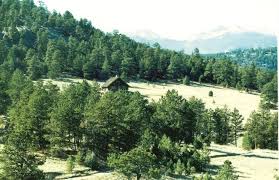 In a poustinia cabin, she would provide homemade bread, butter, tea, and the Bible. Nothing else. People ‘in poustinia’ would spend at least 24 hours, sometimes more in the beauty that God splashed throughout much of Colorado. Elk and deer and majestic eagles were common sites around her sixty-some acres. It was far more than the Rocky Mountain High that John Denver suggested in his music. Lucille would remain in continuous prayer for those in poustinia.

Lucille was a stubborn (and opinionated) woman. In December she caught a cold, and we believe it soon became bronchitis. But she refused to come down off her mountain. She would tough it out. Sadly, it became pneumonia and she finally relented in late January. She descended from God’s ‘holy mountain’ on January 27. Alas, it was too late. She died in the Estes hospital late that afternoon. A week later, she was buried on the grounds of Our Lady of Tenderness.

I begrudge Lucille her stubbornness. I really do. Because many of us were not ready to let her go. Though she had ongoing physical challenges with swelling legs and ankles, she was still a dynamo up until the last weeks of her life. No one expected her to pass when she did. And no one who met and knew Lucille was ever the same.

My last phone conversation with Lucille is so very tender to me. After perhaps 15 years of my ongoing relationship and support for Madonna House, I told Lucille that I was going to apply to become an Associate Deacon of Madonna House. With tears now I can tell you that all she kept saying was, “Oh Thomas... Oh Thomas... how wonderful.” I think she had wanted this for me for many years. It was as if her countless prayers were being answered.

Well, in a very real sense, I am now studying to fulfill Lucille’s dream regarding Thomas. I’m doing it because Lucille isn’t dead. She is very much alive for me, although I miss her physical presence and our telephone times together.

The words of Hosea in Holy Scripture are these: “I will lure her out into the wilderness, and there I will speak to her heart.”

In the wilderness, Lucille spoke to my heart. She still does.