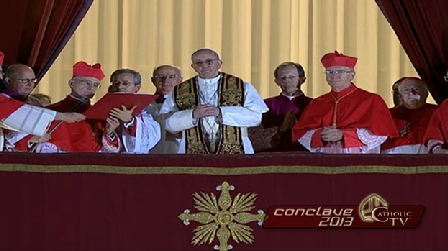 The smoke has cleared and we were just introduced to our new Holy Father, Pope Francis. Cardinal Bergolio of Buenos Aires, Argentina, a 77 year old Jesuit, has just been introduced to the crowd. Prior to giving his first blessing, Pope Francis prayed together with the crowds in St. Peter’s Square (and virtually around the world) for Pope Emeritus Benedict XVI. He then asked the crowd to pray for him and proffered the urbi et orbi blessing.

The man elected to be the 265th Successor of Saint Peter in the conclave, is Cardinal Jorge Mario Bergoglio, S.J., Archbishop of Buenos Aires, Argentina, Ordinary for Eastern-rite faithful in Argentina who lack an Ordinary of their own rite. He was born on 17 December 1936 in Buenos Aires. He was ordained for the Jesuits on 13 December 1969 during his theological studies at the Theological Faculty of San Miguel.
He was novice master in San Miguel, where he also taught theology. He was Provincial for Argentina (1973-1979) and rector of the Philosophical and Theological Faculty of San Miguel (1980-1986). After completing his doctoral dissertation in Germany, he served as a confessor and spiritual director in Córdoba.On 20 May 1992 he was appointed titular Bishop of Auca and Auxiliary of Buenos Aires, receiving episcopal consecration on 27 June. On 3 June 1997 was appointed Coadjutor Archbishop of Buenos Aires and succeeded Cardinal Antonio Quarracino on 28 February 1998. He is also Ordinary for Eastern-rite faithful in Argentina who lack an Ordinary of their own rite.
Adjunct Relator General of the 10th Ordinary General Assembly of the Synod of Bishops, October 2001.
He served as President of the Bishops’ Conference of Argentina from 8 November 2005 until 8 November 2011.Created and proclaimed Cardinal by the Bl. John Paul II in the consistory of 21 February 2001, of the Title of S. Roberto Bellarmino (St. Robert Bellarmine).
Member of: Congregations: for Divine Worship and Discipline of the Sacraments; for the Clergy; for Institutes of Consecrated Life and Societies of Apostolic Life ; Pontifical Council for the Family; Pontifical Commission for Latin America.

Pope Francis is being called by media an “agent of change” and one who is committed to reform and social justice. Let’s pray together for our new Holy Father.