Pope Francis: Why He Leads the Way He Leads 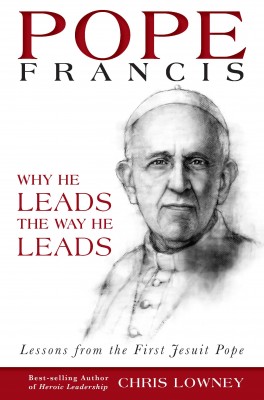 Pope Francis: Why He Leads the Way He Leads

With Pope Francis' pontificate have come several new books on our Holy Father, his spirituality, his personal history, and now -- with the release of Pope Francis: Why He Leads the Way He Leads by Chris Lowney -- the Pontiff's leadership style. I hope you enjoy the following Q & A with author Chris Lowney and that you'll check out this book. LMH

Why did you write the book?

Like the Pope, I was once a Jesuit seminarian. I left the seminary in my early ‘20s. In my subsequent working career, I was lucky enough to serve as a Managing Director of JP Morgan & Co on three continents. When I left Morgan, I wrote Heroic Leadership, which explores what I called “four pillars of leadership” that struck me as a vital part of Jesuit culture: heroism, ingenuity, self-awareness and love.

As soon as a Jesuit was elected Pope, my publisher asked if I might be interested in writing something, and I jumped at the chance to do a “leadership case study,” so to speak, drawing on the Pope’s words and deeds. Not a straight biography, plenty of those have already been written. Rather, I wrote something very different. For one thing, a number of Jesuits who had lived and worked with then-Fr. Bergoglio shared their recollections with me, so I was able to gather a “behind the scenes” glimpse of the Pope “before the cameras started rolling,” so to speak.

What can we learn from Pope Francis’s leadership model?

One of the sicknesses of U.S. business culture—and in our culture at large—is this celebrity cult around leaders. We tend to think of leadership as only for those in charge, like Presidents and Popes and generals. That’s not the solution to any of our organizational problems; that’s part of the problem. Instead, in complex, fast changing environments we need broad-based leadership. For example, in JP Morgan, we needed the whole team to feel they had opportunities to show leadership: in the influence they had on others, the values they modeled, the initiatives they took or suggested, and so on.

I explore six “commitments”—six habits, or ways of thinking, or approaches to work—that the Pope exemplifies, and I invite readers to ponder how they could exemplify those same values in their families, communities, and workplaces.

What are a few examples of these commitments or habits?

Great leaders know themselves very deeply: they’ve come to grips with who they are, their strengths but also their inner demons. But even though they reflect deeply on themselves, leaders don’t get stuck inside themselves: they get over themselves, and live to serve others. So those would be the first two commitments that great leaders make: to confront themselves deeply, but then to serve others. Here’s another two commitments that leaders can make: on the one hand, to be really “in touch,” immersed in the world around them and the challenges, joys, and sufferings of co-workers, neighbors, etc. But, on the other hand, to have a habit of stepping back from the world every day for some reflection on what’s been going on.

Isn’t that contradictory? Plunging into the world yet stepping back from the world? Deeply introspective about oneself yet focused on others?

I would say that there is something paradoxical about great leadership. Look at the Pope, for example: here is a man who is deeply embedded in his religious tradition, and who made a reputation for being uncompromising about that. But at the same moment, the Pope stunned us by the ways he departed from tradition, starting on his first day as Pope: asking us to bless him in prayer before he blessed us; choosing simpler quarters instead of the Papal apartments; his plain black shoes instead of the Papal red; and in dozens of other ways since.

That’s the way it is with good leaders: they are on the one hand deeply grounded and aware of what is fundamental and non-changing: they are anchored in some beliefs and values. Yet they are open to change and they confidently lead change! Both those things—tradition and change- openness—are alive within them. It’s a bit of a paradox.

What do you notice about the Pope’s leadership style and values that is “Jesuit”?

For example, I see a very powerful “frontier spirit” in this Pope, and that is very Jesuit. The first generations of Jesuits went to literal frontiers: they were among the first Europeans ever to visit and work across large swathes of present-day Asia, Latin America, and India.When he was a young Jesuit, the Pope himself had hoped to go to Japan or elsewhere.

Now the frontiers for the Church might not be as much geographical as social: engaging people who have written off religion, or who feel very excluded from society because they are impoverished or refugees. If you look closely, you see how often the Pope talks about frontiers, or building bridges, or reaching out. Those are not exclusively Jesuit ideas, of course, but I suspect that the Pope’s own frontier spirit bears the fingerprints of his Jesuit formation. And there are a lot of similar themes in the book where I try to trace the Pope’s approaches to decision making, to reflection time, etc., to his formation.

I really felt privileged to have some of the Jesuits who were trained by him share some of their recollections with me. Now we have the image of the Pope in his white Papal cassock in the Vatican. But I also have images in my mind of this same man at 5:30 in the morning pitching piles of laundry into big industrial washing machines—doing his part of the community chores. Or feeding pigs. Or drawing a crude map of a neighborhood and inviting his seminarians to walk every alley, meet everyone, take special care of the poor---and when they came home, Fr. Bergoglio sometimes stole a glance at their shoes: the ones who had dusty feet were the ones he knew had really plunged into the work. Those anecdotes were some of the ones that stuck in the minds of his former seminarians; and I find myself likewise being struck by those very same images.

Order Pope Francis: Why He Leads the Way He Leads and support CatholicMom.com with your purchase

How Humility Leads to Respect -- Blessed, Beautiful and Bodacious
Read
How Jean Heimann Leads Us to the Saints
Read
A Father Leads
Read