The Wait for Francis and Googling Humility 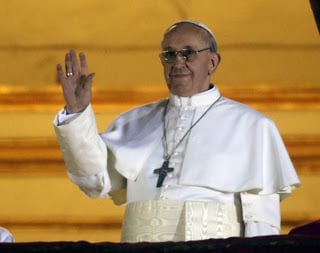 My four-year-old breathed a heavy sigh beside me as he sat facing my laptop.  “I just don’t like new popes.”  His little shoulders sagged.

I had to agree—it did feel like forever from the time the white smoke came pouring out to the balcony appearance.  We were watching the Vatican channel on YouTube, and my son was only mildly impressed by the band and Swiss Guard.  He was mostly interested in seeing the new pope so that we could finally turn it off and turn on his video.  He dug his toes into the carpet sadly.

I was unreasonably annoyed by his total disinterest and by his heavy leaning on my knee.  I couldn’t wait to see our new pontiff emerge from behind that curtain.  Who would it be?  I felt keenly that I should prepare myself for something extraordinary and new, like the first African or Asian or—be still my heart—Irish-American pope.

I wiggled my foot.  I was getting antsy.  Pretty soon I’d have to shut it all down to go pick up my daughter at school and I really did not want to hear the news over the radio.  I wanted to see it, see the man.  And then—the curtain rustled.

“Look!  He’s about to come out!”  I waved my son back over to the screen, as he’d strayed a bit by seeing how many one-legged hops he could do.

The curtain parted and out came the cardinal to announce the new pope.  I strained to make out what he was saying.  Did he say Francesco?

More rustling and out came a man in white.  I stared at the screen, shocked.  Who was this?  I mean, there was nothing extraordinary about him.  He looked very much like a pope.  And then he just stood there.

Oh no, I thought.  This isn’t going well.  I watched him size up the crowd.  Was he stunned by the events of the evening?  I didn’t blame him.  He had only time to receive the cardinals, get changed, and then come out to greet the world with a speech that would be the world’s first taste of his papacy.  And he had to pick a name.  I would’ve been stunned, too.  But, oh how I wanted him to do something—anything!

And then he did.  He started speaking in Italian and suddenly the whole mood changed.  What was he saying?  I didn’t know, but it must’ve been good because the crowd was cheering.  And who was he?  I still hadn’t caught his name, so I had to search online.

“We have a new pope!” I told my son.  “His name is Francis!”  That was the extent of my knowledge.

“Oh, yeah!” he said with excitement, hopping up.  “Can I watch my movie now?”

I mumbled something, quickly reading as many of the search results as I could.  Huh, I thought.  A Jesuit.  And he picked Francis as his name.  And he’s from Argentina—memories from my month abroad in high school in a town outside of Buenos Aires came to mind.  Genius, I thought.  They managed to pick an Italian non-Italian.  My mind continued to crank as I put my expectations of the new papacy behind me and tried to process the actual events.

By now it was time to hop in the car meaning that my son’s video watching would have to wait until after we’d picked up my daughter and he was quite annoyed and blamed Pope Francis.  I prayed this wouldn’t put him off the faith and we piled into the car.  I turned on Relevant Radio was so grateful for their coverage, hanging on their every word.  I couldn’t learn enough about this man who was winning hearts by the second with his undeniable humility.  Even the toddler was getting into it, wanting to hear more about the new “poke” whom she called “St. Poke”.

As the days have passed, and the beautiful anecdotes and Facebook pictures of Pope Francis kissing the feet of AIDs patients have circulated, I’ve wanted very much to follow his example and lead my children with humility.  The thought was thrilling and sounded very noble and the right thing to do, but that’s about as far as I’ve gotten.  Because I don’t actually know what that means, to be truly humble.  I had to look it up on New Advent.  So I am looking to our Holy Father to teach me how to be humble in a world where we have to Google humility to find it.

Pope Francis, you’ve got your work cut out for you.