What if Everyone Yelled During Mass? 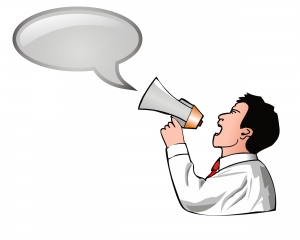 What if Everyone Yelled During Mass?

As many of you know, my husband and I adopted our two children about a year and a half ago.  My son is now 4 years old and my daughter, 5.  We baptized them into the Catholic faith as quickly as we could and began teaching them on the ways of the Church.  We’ve been working on teaching them their prayers since the beginning.  While I’m sure most kids have the Our Father and Hail Mary memorized by now, we’re pretty excited with the amount they can recite with us.

The biggest improvement I’ve seen recently is a result of going to daily Mass.  I started taking the kids to Mass before school and it seemed that within weeks, my 5 year old was saying the responses at Mass.  When I started to think about it, I realized that she’d been going to Sunday Mass every week, but with a few months of daily Mass, I could almost double the amount of Church exposure she’d had with us.  Since they’re starting to learn the Mass parts, they’re more engaged during Mass, waiting to say their “part.” They’ve begun to behave better at Sunday Mass and I credit that to actually feeling like they know what’s going on and being familiar with Mass.  It’s begun to be part of what we do all week, not just on Sunday.  That said, some weeks our attendance is minimal, a kid sleeps in (I’ve learned to try to not wake sleeping children), or someone is having a rough morning etc.  But the days we do go to daily Mass, I’ve found are more peaceful for everyone and I’ve especially found that I can get through the day better.  Of course it’s the grace of receiving Jesus each morning and it’s also being out of the house, so I’m not running around trying to clean up and end up yelling at the kids.

So finally the yelling … my son started to try to say the Mass parts like his big sister, but what I was finding is that he would only say the first and last word and when he got to that last word he would yell it.  At the end of the response to Jesus being raised above the altar before Communion, he’d yell HEALED at the end of the response, “Only say the word and I shall be healed.”  Now traditionally this is a time when people are quiet and prayerful and now it’s being interrupted by a little boy yelling.  Or course I’m worried that it’s distracting but I’m worried people will just think he’s yelling for no reason.  I want to tell everyone (after he does this) “Did you understand him, he’s saying the Mass parts!”  Luckily, we have some wonderful older women at our daily Mass, who love the kids and just smile when they participate.  As his mom, I generally “shhhh” him after his loud outburst and remind him not to yell, but recently I’ve been catching myself when I do this.  Something doesn’t seem right in my reprimand.  He’s participating in Mass, he’s excited to be responding with everyone and he’s saying the word healed in response to Jesus’ presence.  While I don’t want him yelling and distracting others during Mass, his zeal is inspiring.  Shouldn’t we all be joyfully yelling our responses during Church?  Shouldn’t we show our excitement about what we’re saying?  So where is the balance?  I don’t want to squash his enthusiasm for Mass and for participating; instead I want to encourage him to participate with us.  I’m left trying to encourage him to respond in Mass, while reminding him we don’t have to yell.  But I’m starting to think maybe we should!  Maybe the 4 year old has it right and maybe he’s the one teaching me instead of vice-versa.

“Children’s Liturgy” During Mass?
Read
The Very Necessariness of Everyone
Read
Vocation and Discernment Are for Everyone
Read