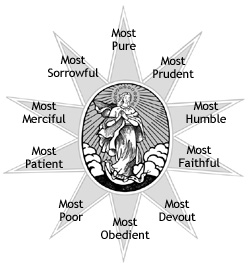 Discovering the 10 Evangelical Virtues of Mary

According to Pope Benedict XVI, with God's help, the evangelical virtues forge character.

The ten evangelical virtues are derived from a combination of the human, moral, cardinal and theological virtues, described to us in the Catechism. They are actual qualities of Mary, the Mother of God who by her example is the epitome of evangelization: chastity, prudence, humility, faith, devotion, obedience, poverty, patience, mercy and sorrow.

In this year of faith, efforts to increase in virtue are a worthy exercise. We are called to evangelize with virtue in a variety of vocations, as a mother, a daughter, a sister, an employee, a wife. Modeling our behavior on the Blessed Virgin is an excellent way to bring others to Christ.  Who more than Mary has brought more of us to her son?

The second Evangelical Virtue of Mary is Prudence.

But Mary kept all these words, pondering them in her heart. Luke 2:19

And he descended with them and went to Nazareth. And he was subordinate to them. And his mother kept all these words in her heart. Luke 2:51

Mary “ponders” these things in her heart. She discerns. She doesn’t react, debate or take any action right away. She simply ponders things first.

The Catechism of the Catholic Church tells us (1806), “Prudence is the virtue that disposes practical reason to discern our true good in every circumstance and to choose the right means of achieving it.”

The prudent woman looks where she is going. Prudence is "right reason in action," writes St. Thomas Aquinas. The prudent woman determines and directs her conduct in accordance with this judgment. With the help of this virtue we apply moral principles without error and overcome doubts about good and evil in our everyday circumstances.

Prudence is also one of the four cardinal virtues, which means it can be practiced by anyone. The cardinal virtues are not, in themselves, the gifts of God through grace but the outgrowth of habit.

So how do we know when we're exercising prudence and when we're simply giving in to our own desires?

How do we know if we are acting prudently or not?  As an act of virtue, prudence involves three stages of mental operation: to take counsel carefully with oneself and from others; to judge correctly on the basis of the evidence at hand; and to direct my actions accordingly.

When faced with a dilemma, we first pray, ask God to direct our thinking.  Next we ask for advice from someone of good character, someone we can trust, of good moral character. We look at all the evidence at hand, the facts in front of us. We never rush. We ask God for his will for us. Then, finally we make a decision and act upon it.

And we must always keep in mind that the definition of prudence requires us to judge correctly. If our judgment is proved after the fact to have been incorrect, then we did not make a "prudential judgment" but an imprudent one, for which we may need to make amends.

One way to integrate these virtues into your life is by praying the Chaplet to the Ten Evangelical Virtues of Mary.