Editor's note: Today, I'm thrilled to share the good news about the beautiful new book Love & Salt: A Spiritual Friendship Shared in Letters. This book is on my Spring break reading list and the chapters I've already read have completely captivated me. I know you will love it too! LMH 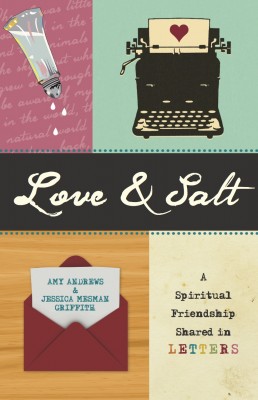 Friendships among women are often depicted in popular culture as a Sex & the City bawdy sisterhood, or as being based on the common denominator of chocolate cravings and gossip. In reality, female friendships are much deeper, as Amy Andrews and Jessica Mesman Griffith attest in their new book, Love & Salt: A Spiritual Friendship Shared in Letters (Loyola Press, February 2013). The friendship that grew out of their letter-writing is redemptive, and tells a story of conversion, tragedy, and hope.

Amy and Jess barely knew each other when they began writing letters in 2005. They met in a creative writing workshop in graduate school, kindred spirits who both confessed to writing about God. When Amy made plans to convert to Catholicism—a decision traceable to a day spent in New York, walking and talking with Jess—she asked Jess to be her sponsor. At first they imagined it as a spiritual practice—a letter for each day of Lent. But what began as a Lenten discipline soon became a habit, and they continued their correspondence for years.

“We had no idea where this antiquated practice would lead,” they say. “We were both seeking God, and we both struggled with persistent doubt, and knew that somehow it would be better to seek and struggle together. In our letters, we wrote ourselves back to belief.”

Love & Salt is a memoir in real time, the story of two different souls on a pilgrim path: Jess, the mystic, steeped in the pageantry and superstition of New Orleans Catholicism; Amy, the rationalist, from an agnostic, nonreligious upbringing. As they grapple with belief and doubt, they find the God they had sought in the airy distance in the back and forth of their letters.

The letters sustained the woman through crushing sadness when Amy’s first child, Clare, was stillborn. They wondered if their friendship and faith could survive the loss. But they continued to write, telling the story of two young women walking together through the trials of daily life, trading back and forth the role of guide and pilgrim. “We wrote to preserve and make sense of our lives; to confess and console, to rant and grieve,” they say. “But more than anything else we wrote because it was the only way we knew how to pray.”

On that day spent rambling around New York, the women found their spiritual mentors: the Old Testament friends, Ruth and Naomi. They found an old pocket edition of the Book of Ruth in a bookstore. Reading it together, they received a vision of friendship and a way of walking with one another toward God. Samples from their letters show how they probe their beliefs and their desire to know God:

Amy: “I yearn to yearn for God....Only by entering a story can one really see it for what it is. This is another way to explain why I’m converting: I want to enter the story.”

Jess: “When my mother got sick, I lost her and my religion too. I’ve found it difficult to commit to the actual practice of Catholicism. In many ways the church is as new to me as it is to you.”

Amy: “When I was little God lived in the trees and the animals and the sky. But when I grew old enough to be aware of myself in the world, the natural world seemed to draw back, and so did God....That is why this letter practice is so good for me. I want to do whatever I can to trick myself into faith, because it sure ain’t gonna come natural.”

Jess: “I don’t know that I’ve ever felt the presence of God in prayer. He seems to show up when we least expect him. But even if we don’t feel that presence, should we pray anyway? We can’t judge the fruits of any practice solely on the basis of our feelings. Prayer is either objectively worth something or it isn’t.”

Amy: “Isn’t that one reason why we write our letters? To find out from what country we came and attempt to discover our souls?....Your letters filled with doubt, humor, darkness, fatigue and moments of joy show me God so much more clearly than any bit of cheerful spiritual wisdom ever could.”

Jess: “The Mass was steady and unchanging and familiar but at some point I decided that it was also true. It was precisely because the Mass didn’t depend on me to feel anything at all. It wasn’t up to me, or how I felt on a certain day, how much emotion I could gin up.”

Love & Salt is at its core the story of how one spiritual friendship is formed and tested in tragedy, tempered and proven in hope. It’s also a testimony to the power of letters, old-fashioned, written- on-paper, delivered by the U.S. Postal Service. As Amy wrote, “may our letters—even the dull, the crazy, the dashed-off ones, continue to repair us to one another and to God.”

Amy Andrews is a recipient of the Annie Dillard Award for Creative Nonfiction and teaches mathematics at Northwestern University. She lives in Evanston, Illinois, with her husband and two children.

Jessica Mesman Griffith's writing has appeared in many publications, including Image and Elle, and has been noted in Best American Essays. She lives in Sweet Briar, Virginia, with her husband and two children.

Order Love & Salt: A Spiritual Friendship Shared in Letters and support CatholicMom.com with your purchase