The Fuss about Marriage 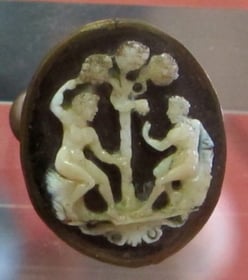 From the beginning of time (Adam and Eve) marriage has been about a man and a woman coming together to form a union and to create a family.  Not one or the other, but both.  It has not even been a mutual decision, sometimes being the decision of parents or the tribal leaders.  But it has always been for the two-fold purpose of creating a union that would hopefully become procreative for the continuation of the tribe, the clan, the pagan community, the kingdom, the religion or just society.  That has been the definition and purpose of marriage for thousands of years.  Why do we need to re-define it?

The Code of Canon Law #1055 states, “The matrimonial covenant, by which a man and a woman establish between themselves a partnership of the whole of life and which is ordered by its nature to the good of the spouses and the procreation and education of offspring, has been raised by Christ the Lord to the dignity of a sacrament between the baptized.” (Emphasis mine.) Yes, I realize not everyone is Catholic and may think they don’t have to agree with this.  But why would the oldest Christian denomination which has its roots in the Jewish faith, that goes way back in history, just come up with this idea about marriage?  The answer is, they didn’t.  Marriage has been about the union of a man and a woman and about continuing civilization forever.

So before you think I am being a bigot or intolerant, I want to explain where I am going with this.  The whole re-defining of the word “marriage” is not about taking away any rights from the anyone. Marriage is not a right any more than children are.  It is a privilege. Would a person assume they would have the right to be an Olympian athlete without first understanding the purpose of the competition?  In other words, would a person assume they have the right to compete in Olympic track events if they didn’t even know the purpose of the event is to run around the track as fast as they can?  I know that seems simplified, but it really is just that simple.  It is not about taking away a level of supposed happiness from anyone.  Happiness comes from living the truth of our dignity as children made in the image and likeness of God, not some imposed idea of dignity. St. Augustine said it best, “Almighty God, you have made us for yourself, and our hearts are restless till they find their rest in you.”  Standing up for the traditional definition of marriage is not standing against anyone, it is standing for a definition  of a word that has meant something specific for thousands of years.

This issue is really an issue about semantics.  Why do we need to change the definition of a word that has existed for thousands of years?  This issue is not about the state of marriage in our world today.  It’s not about the divorce rate or the marriage rate.  It’s not about one country or another, one religion or another.  It is simply about the understanding that marriage is and has always been a union of man and woman for the purpose of procreation.  Maybe instead of changing definitions of words we need to just come up with new words, or better yet, understand the ones we already have.