St. Peter’s Shadow and Your Shadow

In this post-Easter time of year - the time of the early weeks and months of the ‘new’ Christian Church, we gain knowledge and excitement of some of the events of the Apostles as they take the message of Christ resurrected to the streets and synagogues.

Take for instance the recent reading we had at Mass (Acts 5:12-15) in which many ‘signs and wonders’ were taking place. In fact so much was happening that ‘they carried their sick into the streets and laid them on cots and mats so that when Peter came by, at least his shadow might fall on one or another of them.’ And many were cured from unclean spirits and there were many healings. We know, of course that it wasn’t St. Peter that was curing them - it was God’s power working in and with the Apostles, and in this case, specifically Peter. 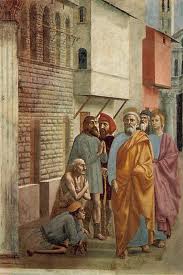 St. Peter’s Shadow and Your Shadow

There is an interesting old, old painting by Masaccio uncovered in the Church of the Santa Maria del Carmine in Florence, Italy. It depicts this very segment of the story told in the Acts of the Apostles. You can see an image of the painting by visiting this Web Gallery of Art page: http://www.wga.hu/frames-e.html?/html/m/masaccio/brancacc/st_peter/shadow.html

I was thinking about this ‘shadow of Peter’ phenomenon this past week. What must it have been like to be the brash fisherman who often stuck his foot in his mouth who all of a sudden was beginning to draw the kind of attention and crowds that Jesus, Himself did? Is this a power of the Holy Spirit working in the early Church but not now available to us?

And then it came to me - we are all given gifts of the Spirit, to one degree or another. My wife Dee recently wrote to a long-time Colorado friend and was sharing about all the things we are involved in in our Catholic community where we live. This will sound self-serving, but I just want to do this so you can see that each of us are given a chance to ‘cast a shadow’ on the community where we live.

Some years ago, we started a book club - a Catholic get together for four couples. We started first with a great primer book LIVING THE CATHOLIC FAITH by Archbishop Charles Chaput. We met twice a month and we did an average of two chapters each get together. Followed by relaxation time with some interesting desserts. :-)

That group later expanded to invite another four couples and a few singles and we now are meeting every two weeks at a retreat house. Get togethers include dinner, a Catholic DVD segment and discussion. We are averaging about 16-20 attendees regularly in attendance.

Dee is involved in the parish crafting effort by the ladies Sodality, and a small group meet each week for a Marian Cenacle hour of prayer and quiet time.

I’m going to a couple nursing homes each week, taking Communion or just prayer-visiting with mostly elderly residents. They seem to really look forward to these get togethers, although I’ll be frank and say that some of them don’t remember much from one week to another.

Dee is in the Marian Sodality and I’m in the Knights of Columbus which raises money for Special Olympics, pro-life activities and other charitable efforts. And of course, we put a lot of hours into our Catholic Vitamins Podcasts and guest interviews.

When we look back on these -- we can see that we are casting our shadow upon a number of our local neighbors and upon a much broader group of e-neighbors that we may never meet. But they are people that, to one degree or another, we will have some measure of influence or persuasion.

Well - enough promoting ourselves. I’ll bet there are people that are so involved in their parish and in their faith and who seldom get any recognition (or thanks :-( ) But they too are casting a shadow which in one way or another may be a factor in healing the minds and hearts of others.

And then... and then, there are the growing number of Catholics who are on the worldwide web and they are doing blogs and columns and podcasts and videocasts. It’s just amazing what many of you are doing to evangelize and share our wonderful Catholic faith. 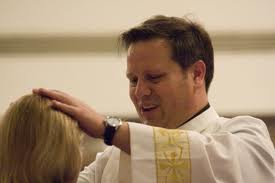 Now before I leave this general subject - over recent years, we’ve been to healing Masses and liturgies. And I believe there are still priests, deacons, nuns and laypeople and evangelist situations, just as with St. Peter, where Christ chooses to heal people of their affliction through the ‘shadow’ cast by their healing work. In the early days of our Catholic Vitamins work, I interviewed a Fr. Stefan Starzynski from Virginia.

Fr. Stefan has a regularly scheduled healing ministry in the Northern Virginia parish where he is stationed. And if you’d like to see or read more about him, you can find Father at his blog site: "Let the Fire Fall" | Sharing Hope through the Charism of Healing. fatherstefan.wordpress.com/

Father has also written a book about healing which shares stories from his life as a priest and his healing work and stories from people who shared them with Fr. Stefan. His book is titled MIRACLES: Healing for a Broken World. That’s a great title and that’s exactly why the LORD gives us miracles. To restore or give faith to a broken world.

Have you thought about the shadow you are casting in this broken world? We need your prayerful participation.

Blessings one an all.