A note from Lisa - Today, I'm happy to share the following Book Notes interview with author Allan Yoskowitz, the author of Codename: Winterborn, shared with us by John Konecsni. Enjoy! LMH 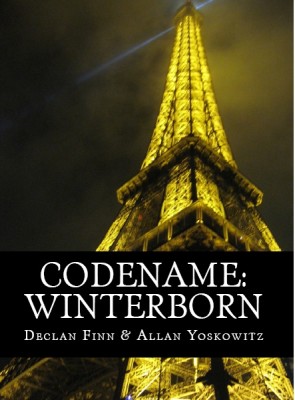 Today, this column is featuring the first of a three-part interview with author Allan Yoskowitz, co-author of the new book Codename: Winterborn, a science fiction novel that has some surprisingly religious twists to it.

Q: So, what is Codename: Winterborn about?

Allan Yoskowitz: About 280 pages. [Laughs]. In 2090, there's a small nuclear war. It's not Terminator, the planet loses only around two billion people. The book is set three years later, during a mission to seek out the nuclear missile of the Islamic Republic of France. The mission is screwed over by a group of senators who tell the French everything. The last man standing is Kevin Anderson, the team leader, and a former SEAL.

AY: To start with, it looks like it. But Codename: Winterborn  is different. Science fiction espionage collides with philosophy and politics. There are actual consequences. Swearing revenge might make you feel better, but what happens when politicians are the one you need to kill? When does vengeance stop being a personal vendetta, and becomes a duty? Can you kill people who need to die, saving those who will come after you, even though you know that your life is over? In the case of Kevin Anderson, he knows what he has to do, and he has the will -- but does he have the ability? And even if he survives, what happens next? And, most importantly, from a spiritual perspective, what does it do to him?

Q: Where does religion start to enter into this?

AY: From page one … okay, more like chapter one. To refer back to your last question, what separates Codename: Winterborn from your standard revenge novel is that Kevin Anderson is not a killing machine. He's deeply religious, goes to church on Sunday, and even has good reasons for doing what he does. Even the “revenge” aspects are deep-seated into the Catholic philosophy of natural law, which includes the premise of “tyrannicide” – a fancy way of discussing if or when assassinating a tyrant could be morally acceptable. Kevin isn't a cardboard cutout, he's a deeply religious person, and a deep thinker. And, sometimes, he almost thinks his targets to death.

We won't even go into the priests riding to the rescue.

Q: So, why this premise? You have a very strange little universe, if only from the tidbits you've given us here.

AY: Believe it or not, the book started as a prequel to a series I had already developed on paper. Then Codename: Winterborn "ate” book one. But the nuclear war was always a part of it – and with anti-missile systems online, any nuclear war will never be 100% destructive. As the the Islamic Republic of France, that isn't our idea, that was actually suggested by real-world birth rates in France. As of ten years ago, the demographics suggested that France would be an Islamic country by 2050.

AY: [Laughs] Who doesn't like killing politicians? On paper. Vince Flynn has gotten away with it for over a decade now. Only in our book, we make sure to kill the Senate intelligence committee (which doesn't exist), and we don't identify what political parties the targets are from. We don't want to encourage anyone to skeet-shooting politicians.

Q: If we could backpedal a bit, what about “priests riding to the rescue”?

AY: After a fashion. Keep in mind that only half the novel is about revenge / tyrannicide. The second half is about Kevin Anderson dealing with the consequences of his actions. Remember, this is a world where we're missing about 15 states, the Senate is only 70 senators, so this is a small body of people. They know each other, they know each other's kids. You can't go around offing over a dozen of their colleagues and not expect blowback. But at the same time, the colleagues have all died because they betrayed the country. What happens next is when the real fun begins.

The priests come in because we needed a non-government agency to act. All governments, without exception, do not – some might say cannot – act without some reason that is beneficial to them. An NGO is different. And, seriously, what is the biggest, most generous NGO outside of the Catholic church? That's probably why there are so many conspiracy theories about it – before there was Blackwater and private military contractors, there was [dramatic pause] the Catholic Church.

Q: But you're not doing a conspiracy angle, are you?

AY: Not with the Church, no. Mostly politicians. And the way we handle politicians is interesting. We've had one reader – Ellen Stedfeld, an artist friend of ours – suggest that they were almost cartoonishly evil. But the fun part is that we're only taking parts of historical politicians who have pulled some of this garbage, and condensing it into one, contemporaneous body of senators.

AY: Who says? Babylon 5, the biggest science fiction show of the '90s, was possibly the most religious science fiction on tv ever – and it was written by a self-proclaimed atheist! Religion has been part of culture since the dawn of recorded history, where is it written that it's going to be gone in the next five centuries, to heck with the next five decades? Aside from p%^&!@#s like Richard Dawkins? To exclude religion from world building is lazy and dishonest. Everyone believes in a higher power to explain everything. Listen to Steven Hawking, and he obviously worships science; his notion of the start of the universe sounds more like it was ripped from a Star Trek script – he lost me around “self-sustaining temporal loops.”

Q: Why a Catholic character?

AY: For the most part, so we could have a character with a ready-made philosophy for tyrannicide. I'm Jewish, but most of the current philosophy revolves around Israeli's right to exist, and falls under arguments for self-defense. This was about fighting corruption within your own ranks, where they might be so high up that you're not certain that something can be done about it. Natural law philosophy has that, and we don't really know a lot of people using that outside of the Catholic church – they never throw any good ideas away.

Another advantage is when we get to situations that make Kevin Anderson – our protagonist – squirm, since he's such an altar boy. We have some interesting content that messes with his head.

Q: Would you like to elaborate on that last part?

AY: There are moments where the protagonist, Kevin Anderson, goes near the edge of undue violence -- a certain level of violence has to happen in, say, a battlefield. But what happens when Anderson starts taking out his rage on someone? It happens, and immediately afterwards, we're the aftereffect on Anderson himself. Welcome to the Catholic guilt aspect

Have I talked it to death yet?

Q: Last chance: anything you'd like the readers to take away about the book?

AY: Well, I hope that they come away with a sense that they've had a fun time, and that maybe they've learned a few things here and there about certain real-world policies that have some nasty side effects. If you think that drone strikes on American citizens on American soil is bad, you should read Codename: Winterborn, if only to see other stuff that politicians can get away with.

Order Codename: Winterborn and support CatholicMom.com with your purchase