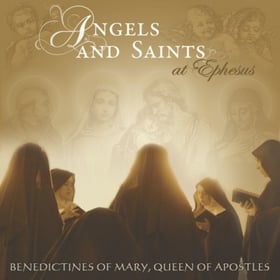 Angels and Saints at Ephesus

If you've ever wondered what singing angels sound like, it's easy to imagine the possibilities when you listen to the Benedictines of Mary in song. This order of contemplative nuns melted our hearts with their first CD "Advent at Ephesus" and now they are back with a new release that launches on May 7. "Angels and Saints at Ephesus" builds on the strengths of their first project and is truly a gift, a tool of the New Evangelization. This week, we're thrilled to be giving away one copy of Angels and Saints at Ephesus on its release date. See the details below and be sure to enter to win this treasure.

Benedictines of Mary sing of Angels and Saints at Ephesus

Atlanta, GA, April 9, 2013 – As a follow-up to their chart-topping first release with the Decca Label Group, The Benedictines of Mary unite their voices once more in ANGELS AND SAINTS AT EPHESUS. This second album, a year round collection, will entertain and inspire, featuring 17 English and Latin pieces sung a cappella for the feasts of the holy Saints and angels.  Recorded once again at their Priory in the heartland of America, this new album is a dynamic yet pure fusion of their contemplative sound. The Sisters call to mind the glory of the future vision of God in the company of all of His angels and Saints.  Click here for a visual sneak peek at the album.

Last November and December, the Sisters’ debut album, ADVENT AT EPHESUS, with De Montfort Music/Decca, spent six weeks at #1 on Billboard’s Classical Music Chart, and the Sisters ended up as the #1 Classical Traditional Artist of 2012, according to Nielson’s Soundscan. Featured on NPR, USA Today, People Magazine and The Washington Times as well as countless other critically acclaimed press outlets, The Benedictines of Mary have created another beautiful recording of their music.

“Gathering the hymns we have learned and loved, it seemed only natural to suggest the theme of the Angels and Saints, the heralds of God's glory and grace for this album. Music is a vital part of our spirituality, and it has been a blessing to have it blossom and broaden in recent years. We are all very excited about this release,” said Sr. Scholastica, the Order’s sub prioress and the designer of the album’s artwork.

De Montfort enlisted nine time International Grammy® winning producer Christopher Alder, who hails from Germany and two-time Grammy® winning engineer Mark Donahue to record and capture the Sisters in their contemplative environment singing all of ANGELS AND SAINTS AT EPHESUS.

Kevin Fitzgibbons, CEO of De Montfort Music remarked: “On the heels of the impact of ADVENT AT EPHESUS, here is the angelic music of ANGELS AND SAINTS AT EPHESUS, an answer to numerous requests and comments asking for new music to listen to year-round from the Benedictines of Mary.”

Pre-order the CD now and receive in time for Mother's Day.

Founded in 1995, The Benedictines of Mary, Queen of Apostles, are a young, monastic order of Sisters. The Sisters sing together eight times a day as they chant the Divine Office in Latin.

De Montfort Music is a division of Aim Higher Media, both founded by music-industry veterans Kevin and Monica Fitzgibbons. Its special mission is to sign, develop, produce and bring to market the very best in Sacred Music.

To enter to win "Angels and Saints at Ephesus", leave a comment below by Midnight Pacific on May 7, 2013. One winner will be randomly selected and notified by email.