The "Moment": Seeing Your Child as a Unique Individual 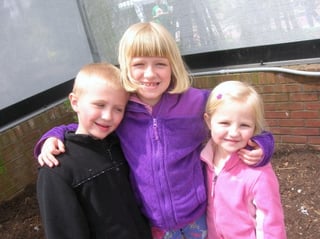 The "Moment": Seeing Your Child as a Unique Individual

My oldest, Gianna, is only 6 1/2-years-old. So, I haven't been at this motherhood thing terribly long (although it's very hard to remember my old life!).

I recently had a "moment." I think that parents of older children might relate. I'm talking about the moment when you suddenly look at your child through a new lens and see him/her as a person...not just as your totally dependent son/daughter...but as a completely unique individual who is separate (and perhaps very different) from you!

I'm sure that this reality (that children do grow up!) will sink in as the years pass, but it is still quite a new phenomenon for me (as my other children are ages 5, 3, 2, and 1, and I still think of them all as my babies)!

Every time we go out, I am struck by how outgoing and personable Gianna is...with everyone. At home, her mood can go either way (I've been reflecting a lot on moods lately...and how much one person's good or bad mood can affect the entire family in seconds...it's kind of unbelievable!). But, when we are out, she just loves to interact with people. And, she does so in a happy, confident, and easygoing manner. People are always commenting on her friendliness.

I am proud of who she is becoming...especially at her age. I was scared of my own shadow at age 6. I remember being petrified to speak to adults, and I was only slightly more comfortable with kids my own age. I still have moments of shyness (don't we all?), although now I love socializing with people. It was in college that I finally found my voice! I'm glad that Gianna found hers in Kindergarten (I hope insecurity doesn't take it away as she grows!).

My "moment" came one recent Saturday. I signed Gianna up for a basketball class at our local recreation center. She's a competent swimmer now, so I thought we'd take a break from swimming lessons. As she's tall (she's always been in the 90% for height), people joke with her about being a basketball player...so, I thought we might as well see if she likes it!

The basketball class description said that it was basic skills for both genders, ages 5-12. I thought that was a pretty big age spread, but I was hoping there would be other younger girls in the class.

When we arrived on the first day, I knew immediately that I was wrong. We were a couple of minutes late, so the warm-up was under way. On the court were about eight boys. All of them were older (some looked much older) and of a different race. Some of the boys were showing off their skills. Gianna definitely doesn't have any of those (I don't even know that she held a basketball before that day!).

I nervously glanced at her. I wouldn't have been surprised or upset if she told me that she did not think this was going to work out (we could've gotten a full refund). Rather, she totally surprised me.

After taking a deep breath, she smiled at me and went right over to the teachers to introduce herself. A moment later, I watched as she attempted to dribble the ball for the first time ever. I quickly snuck out (there was a treadmill with my name on it...and I wasn't about to give up a rare opportunity to exercise!).

As I exercised, I felt so much pride and thought, "Who is this child!?" Surely, she couldn't be mine! That scenario would have even been hard for me...even as a grown woman. I still remember the first mom's club meeting that I ever attended. I had a 3-week-old newborn and I was desperate to make friends, but as walked in the door and saw all the experienced moms with multiple kids...I nearly left (so glad I didn't!).

I see Gianna differently now (although her age-appropriate temper tantrums and drama don't let me see her TOO differently!). I thank God for who she is becoming...because of me (hopefully)...and in spite of me! I am recognizing how much she is teaching me and molding me, too. I wouldn't be who I am today if God had not blessed me with such a precious, irreplaceable little girl.

I pray that with Mary's help, we will both blossom into the women that God wants us to be. Here's to many more "moments!"