Two from the Bookshelf

I participate in a Bible study group one night a week, and I attend a group that studies Aquinas' Summa Theologica and other theological works a couple of times a month. I enjoy both of them. But I have to be honest, I prefer reading for entertainment over reading to better understand my faith. That's not to suggest that the two are mutually exclusive.

I don't tend to get much out of scripture in a long silent reading session. That's why I enjoy our Tuesday night Bible group. Reading aloud, as a group, a few verses at a time allows me to get far more out of the reading than I would alone.

Reading theology? That's just tough going, period. Aquinas in particular. We may get through five pages of text in a two-hour session and still have questions left unanswered. Interesting? Absolutely. Fun? Meeting with the group, yes the reading itself, not really.

For fun, I usually read crime novels. A few American writers, more British writers and in the last few years lots of Scandinavian writers have been on my reading list.

I enjoy them because they are usually fast paced. A good crime novel seems clever on the surface while providing mindless entertainment. Yes, you can ponder the nature of evil as you read, but you're not going to get a better understanding of God by figuring out how a murder occurred in a room that was locked from the inside.

Last month, I developed a sense of "murder fatigue". I was in the mood to read something entertaining with a Catholic perspective. I thought about the usual suspects, Flannery O'Connor, Graham Greene, maybe a few of Chesterton's Father Brown stories. But I decided I wanted a change of pace in Catholic literature as well.

I settled on a couple of works that had long been out of print. One was Edwin O'Connor's Pulitzer Prize winning 1961 novel The Edge of Sadness, the other was Caryll Houselander's 1955 childhood memoir, Rocking Horse Catholic. O'Connor's novel was re-published in 2005 as part of the Loyola Classics series, Rocking Horse Catholic was revived as an E-Book by Catholic Way Publishing in March.

Although both books depict the Catholic experience of the mid twentieth century, those experiences could hardly be more different. 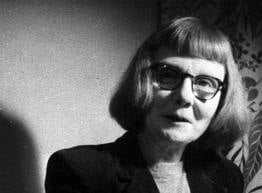 Houselander tells us the story of her childhood in England. She is an outsider fighting her way into the Catholic Church in the days just before World War I. This was a time and place where Catholics themselves were outsiders.

The child of affluent and indifferent parents, she was shuttled among different boarding schools and convents for much of her childhood.

Her memoir focuses on her life from about age 6 when she was baptized as a Catholic (Thus a rocking horse rather than a cradle Catholic) and her early twenties. It is the story of an intense and difficult conversion experience.

It is also a story of mystical Catholic experience. She describes three intense personal revelations that occurred at critical points in her life. The most stunning of these was a three day period of time as a young adult, when she saw Christ in everyone she encountered on the streets and subways of London.

You will find no such mysticism in The Edge of Sadness. The novel's protagonist, Father Hugh Kennedy, is the insider's insider. A Catholic priest in a predominantly Catholic city, a lead character in a novel where all the characters are Catholic.

Set in (we assume) Boston in the forties and fifties, the novel describes a cultural Catholic experience. Father Hugh is a good priest, he says mass, reads Newman, prays the liturgy of the hours, but is disconnected from his parishioners and his fellow priests.

The novel begins as Father Hugh attempts to settle in to "Old" Saint Paul's, the parish to which he assigned after several years in the New Mexico desert living in a center for alcoholic priests.

Once the pastor of bustling, prosperous Irish Catholic parishes, he finds himself placed in a parish that is past it's prime in a once Irish neighborhood that is now home to a diverse group of poor immigrants.

So far, that's just fine with Father Hugh. They make few demands on his time or his emotions. A late night phone call from and old friend of his father sets an odd chain of events in motion. He is asked to attend a birthday party that reconnects him with the Irish Catholic community he was raised in. They very people he had avoided since his return from the desert.

It's the story of a man who never lost his faith, but who's faith had become dry and academic. It's the story of a spiritual rebirth that occurs not through miracles or revelation, but by daily chipping away at the things that distract us from God. (Although, you could argue that being invited to a banquet after exile in the desert does sound like a minor miracle.)

These are two very different Catholic stories that share the common message that faith is not always easy. Both are well worth reading.