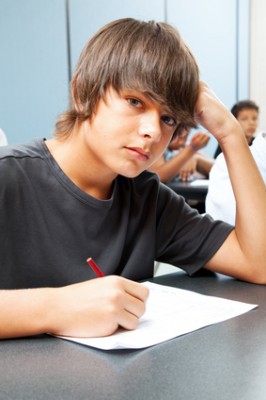 Our response to our son Ian’s entrance  into middle school provides another good example of being your kids’ P.A.R.A.   In Paying Attention (the first two steps),  I observed the impact of his early struggles.  Ian did overcome the social awkwardness of being a mainstreamed deaf kid with bilateral implants along with some physical and occupational therapy deficits from a treacherous birth.  But, their legacy influenced Ian’s perception of himself transitioning into middle school.  Despite, according to teachers, being one of the brightest in the class, Ian considered himself on the lower tier of the academic ladder.  He reacted with a minimalist approach to school work.

Ian rudely awoke to an array of never-yet-seen sub-par  grades the first few months of middle school.  Sloppy work, some late or incomplete papers, and not letting us know of his upcoming exams and studying for those didn’t cut it in middle school. Habits that allowed Ian to slide by in previous years collided with the demands of one of the most academically-challenging Catholic middle schools in our area.

Putting Ian in, as Dr. Ray Guarendi would say, “black out”— losing all privileges other than eating , sleeping, and doing homework—had some effect in waking him from his slumber of how serious we took his school performance.  But any progress seemed tenuous.

We took our Paying Attention and Responding to Ian’s I.E.P (Individual Education Plan) meeting.  There we collaborated with Ian’s real para-educator— the deaf itinerant teacher, the speech therapist, the social worker, etc.—to figure out the best way (our Response) to help Ian perform his best.  I was unsure how much hand-holding to give a 12-year-old, but not wanting him to drown in middle school at the same time.  Sensing my husband’s and my confusion, the deaf itinerant teacher dropped her waterline.  See what happened as a result of her getting personal.

The Catholic Women’s Guide to Healthy Relationships Tip:  Recognize we need to work with others to be the best P.A.R.A. we can be for our loved ones.