Last year, one of the first apps I wanted to share with CatholicMom.com readers was Packing Pro. It’s the app that helps me make sure that I don’t go on vacation without important stuff like pants. 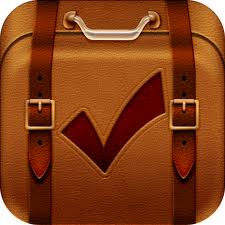 QuinnScape, the company that makes the Packing Pro app, is constantly looking for improvements to make, and sometimes it seems like they can read my mind. They’ve just done a major overhaul on the app, and there are a couple of terrific features that make the app even more useful than it was before!

First of all, the sharing is much easier than it used to be. When I first got the app, it could share, but it was kind of dodgy. I was never really certain if it would actually work, and I often resorted to printing the list from a file within iTunes (which is still a way to share the lists). But I wasn’t a fan of the way it looked. 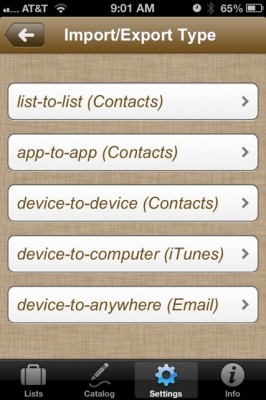 Using Bump and other apps that share in similar ways never seemed to work for us. (I don’t know…maybe I don’t bump right or something.) And I often would want to print lists for my girls to have in their room while they packed, so that my phone was not lost in their room.

But emailing the lists is easier than it used to be, and the lists are formatted better than before.

This is best part is my other favorite improvement in this update. It’s something I secretly wished for, but never actually got around to writing in about.

The only thing better than organizing a packing list for vacation is the ability to sort it out based on person or bag that it goes in. 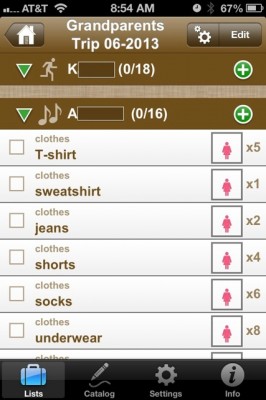 So I can sort out a list of JUST my younger daughter, email it to her and let her print it off, and not have her scratching her head as to why she has butter, mayonnaise, and chicken on the bottom of her list. (“Sorry, honey, that’s part of my kitchen supply list, and I had to print that off on the bottom of your page.”)

If my kids want to know what they need in their toiletry bag, I can sort out the toiletries that they need specifically and give them that list.

Now, this does mean setting up your list to say what bag you want each item in as you add it, but once you put that in, it’s a part of the main catalog.

If you want to have a certain section of items just for an overnight bag, and have everything else in a list for a big suitcase, you can do it! Once you do the work, it stays done and ready for the next trip you take.

I tried this out on a quick weekend trip we took. I emailed each girl her own list of items needed, then gathered my own clothing. We weren’t missing anything!

The good stuff is even better

You can still edit the master list of items, as well, adding what’s important to you (Divine Office book and Catechism are not on the app’s list) and deleting items you know you’ll never have to worry about bringing along. (I’m pretty sure I won’t need iodine tablets when I visit my family.)

You can leave notes for yourself about particular items, like what SD cards you need for your camera, which cereals you’re planning on bringing for breakfast, or even “don’t pack those pants with the gigantic holes in the knees” for your kids to see when they look at the list. (On the iPhone/iPad, those are in the details for the item, but there’s a little icon indicating that you’ve left a note for that item.) 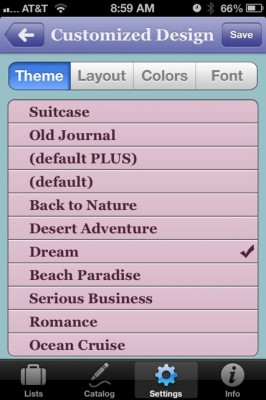 As always, you can customize how Packing Pro looks, choosing colors and fonts that are easy on your eyes. (Or, if you want to mess with your husband, choosing fantastic fonts that are all scrawly and pretty, but nearly impossible to read. I do wonder why QuinnScape includes Zapfino as a font. Yikes!)

You can create your own categories (Kitchen, Religious Stuff, School, Crafting, etc.) and create items to go into each category, as well.

Another thing I noticed since the last update is the ability to turn off the auto-lock feature while using the app. This is great if you’re packing things and don’t want to constantly unlock your iDevice every few minutes, but also don’t want to turn auto-lock off completely for everything on the phone. 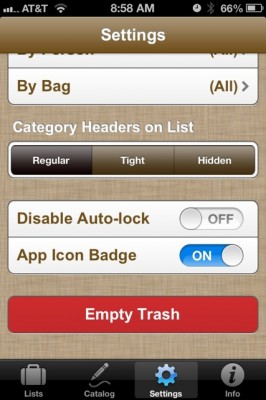 (Not that I’ve ever done that and then discovered a few hours later that the battery is completely drained and I can’t so much as see the time until I plug the phone back in for a few minutes to get a little bit of charge in the battery. ahem.)

Back up to iCloud

And, finally, there’s the iCloud backup capability. If you have the app on multiple devices like we do, the app backs up to iCloud and will open on each device (providing you are using the same iCloud account).

So if you’re using an iPhone and an iPad, the lists will sync with each other over iCloud. If you are not using the same iCloud account, then sharing must be done with one of the other options (Bump, via contact card share, or email).

I took a good look at the iPad screenshots here, and it’s even more amazing on the iPad, with more information on the screen at once to make it even easier to go back and forth between categories.

I still whole-heartedly recommend Packing Pro, and think it’s still an awesome deal at only $2.99. If you think the price is a bit steep, there is also Packing, which lacks the iCloud backup and a few sharing features, but still gives you a great deal of features, including filtering your lists by person or bag. It’s only $0.99. (You can go here to see the differences between the two levels.)