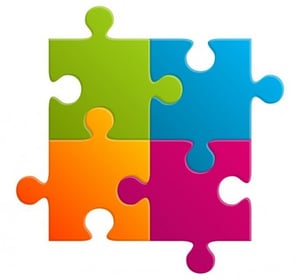 Editor’s note:  This post was first published on www.greenforgod.blogspot.com on July 21, 2011

Have you ever seen the old PBS series, Connections? It's kind of like seven degrees of separation but with a history/science theme. Science historian, James Burke, hosted the program and showed how historical events and scientific discoveries would build upon each other to finally culminate in a particular piece of modern technology that we use today. Of course, "today" was actually 1978 and 1979. I imagine the program would be a bit dated if we were to watch it today. So, if you haven't heard about it, don't worry. You’re not behind in your pop culture literacy.

The thing that was so fascinating to me about that program was the amazing interconnectedness of history to science and of one scientific advance to another. Burke would narrate the program by winding us from one invention or event to another; showing us how they were connected. It was always surprising to find out how strangely things were connected to each other.

It’s like being Catholic. It’s pretty common to meet another Catholic and find that you both share a friend or relation. They might have gone to school with a sibling of yours. Maybe they’re friends with the same priest who baptized you or the nun that taught you in parochial school. I don’t know about you, but I love those unexpected revelations.  It makes me feel at home in the world.  And, it's a reminder that we’re connected to each other in a world that is smaller than we realize.

This connectedness can help us understand the importance of our job as stewards of Creation. Sure, we’re called to love our neighbor but, if we don't know our neighbor it's awfully difficult to love them and care about them. But, if taking care of Creation effects Linda, the neighbor-of-a-friend-of-my-brother’s from elementary school, it's harder to ignore our job. When you put a face on those affected by environmental decline, it gives you a greater sense of how your actions affect others.

Ultimately, we’re all connected; not just to the “Lindas” of the world but to all of God's Creation. Our lives touch each others. Just like George Bailey's life affected so many others in "It's a Wonderful Life", so our actions affect others, even others we've never met.

So, the next time you think that you’re not hurting anyone when you’re wasteful with our earth’s resources, just look next door. I'll bet Linda, or Bob, or Rachel, or Stephen would tell you to save some of those resources for them.