My Road to Accepting Medication 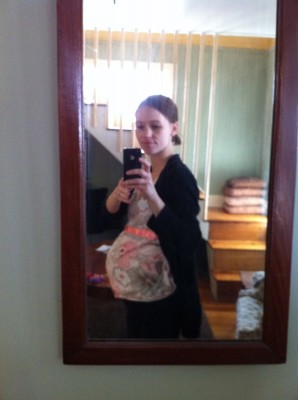 My Road to Accepting Medication

Being pregnant is like a cloud of heavy emotion following you around, until you finally consent to let it in, when it explodes. Kind of like a storm. And you can’t. stop. crying. Because everything feels so heavy (!) and so serious(!).

However, I’m here to talk today about the fact that there's a big difference between simply being sad, or tired, and being clinically depressed.

I take medicine each night, and without it, I would be too anxious or depressed to sleep. I don’t like the thought of needing it, especially while pregnant, but it makes my life better. I also don’t like talking about it. I’ve heard enough from others about psychiatric problems that I tend to be the one that doesn’t like to share all of my moody stories. I finally got the courage to write about depression recently, and I mentioned anxiety - the word- in a conversation the other day. And that was a big moment. And I still feel shame about it if I confuse reality with my previous perceptions of psychiatric medication.

I think the worst stigma about mental illness is that if you have to take medicine, you have “emotional problems”- meaning, you weren’t “raised right,” or you can’t get your issues in line through therapy, or exercise, or by seeking your faith more seriously... or (insert natural remedy here).

However, the truth is, mental illness and/or the need for medication is complicated.  Many things can trigger an emotional struggle. This year we moved, I had a baby, and I became pregnant. Starting over in a new city has really been S.T.A.R.T.I.N.G. O.V.E.R. It is not the same place it once was!  And we are not who we were when we left. We are older, we are Catholic, we have a bunch of kids, and we have changed. A lot.

Despite setbacks, or perhaps because of external factors, the easiest route is to think, “I am normal, I am fine, I don’t need medication.” However, let me be the person who says it- it is ok to take medicine for psychiatric problems. These issues abound, and sometimes coping is too hard.  To deny it, we try to hypnotize ourselves into thinking that the facts aren’t true.  I often think I am a pretty balanced person. But if I ask my husband, apparently this is the least difficult of my pregnancies. I can’t remember how bad it must have been before, but it is a good thing I’m taking something now.

Of course sarcasm and humor are very thick shields against any sort of “madness” or mental illness. And the shame and the scars are as thick as any black fog. The scars are usually accompanied by denial. The truth is, shame is sometimes (often?) associated with taking psychiatric drugs.  Most don’t talk about taking medicine with new friends. It isn’t pretty and we might be tempted to think it’s not any of their business.  You think it is easy for me to mention it, but actually I feel like it is an ugly, hideous, embarassing thing- much worse than admitting to thinking you’re fat!

I accidentally got down to one pill without noticing I needed a refill. I had a mild panic attack because last time, I ran out of refills without knowing it. It backfired and I panicked, unwilling to admit to myself the kind of rock bottom I have hit in the past. When I was first pregnant, and staying with my parents for six weeks while we waited out the close on our house, I was overwhelmed, and instead of dealing with that tiredness and anger, I acted out in my anger. I said and did things that I regret today.

The Reality: A Mix of Various Factors

Through the weeds and smoke and cobwebs, I have simply wanted people to accept me as me- the “Normal” Tacy. I want people to see a person who doesn’t hit rock bottom, who doesn’t do unexplainable things in a moment of exhaustion.  But no, there is no “Normal.” We all have issues, and these issues abound. But the beauty is that I am healing. Medicine and therapy are some of the way that I am seeking out that healing.

I can still remember the look on my husband’s face, and on my parents’ face in the weeks leading up to my current diagnosis. They looked worried- fearful. Confused.  That feeling of depression lends its way into a confusion, and bitterness at all the things you’re not. The things you’re not becoming, the things you’re not doing.  It greatly affects relationships. It is important to seek treatment at the right time. I wish I could take it all back my past anger toward God, and the moments of doubt about how beautiful I am in God’s eyes. Yet God gives meaning and he redeems the unredeemable.   And in the mean time, I am thankful for the medication that I take.