Dads -- You are Important! 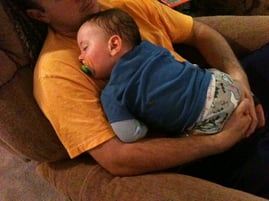 This month we dedicated a special day to honor fathers. It’s the one time a year fatherhood is acknowledged and celebrated publicly. Dads get kind of a crappy deal when it comes to attention and appreciation. Father’s Day was probably invented as a sort of afterthought. “Oh yeah, what about those guys over there hanging out with those kids…”

Generally speaking, if and when dads receive attention in our society it’s usually in a derogatory manner. “Deadbeat” and “Dad” are synonymous in the pop culture dictionary.

Reading through statistics about the absence of fathers and its affect on children and families lends credence to that one-sided caricature.

But what if we inverted those numbers and looked at them from the inside out? What do they tell us?

“Dads - you are IMPORTANT.”

Of course, mothers and fathers are both important … but in different ways.

Dads’ influence in children’s lives is profoundly far-reaching and long-lasting.

I see proof of this every day in our own family. I can ask one of my children to put their shoes away about ten million times before he actually does it … if he does it at all. Daddy comes home, and the shoes are back in their place before he can finish saying “Put your shoes away”. I take the kids to daily Mass and they make all sorts of noises, crawl under the pews, whack each other and do anything but stay still. When we go to Mass together, with Daddy, the kids are so still I forget they are there – and at least one falls asleep in his arms every time.

This goes for any other public places. When out and about left to fend for myself with the younglings, I coax…bribe…warn…plead…beg “for the love of your mother!!!” Nothing. They’ll look at me (maybe) be quiet for about 2.5 seconds and then go right back to their screaming and fighting or whatever else I told them to stop doing. It’s like they are trying to make my head explode just to see what it would look like.

However, one “look” from Daddy – complete silence for at least a good solid hour if not more. They are like putty in his hands. While more like putty stuck all over my face and hair with me. Sometimes I try and sound like him but they know it's me. I know what I do for them is important. They spend the majority of their time with me, it’s my primary job to guide them and mold their characters. I spend my day laying out the bricks – getting most thrown back at me. But it’s my husband – the father – that comes in and reinforces the foundation and seals it up. What I can work all day on with the kids, he accomplishes in a matter of seconds.

He’s got super powers. Apparently it’s a built in feature for dads. Moms very obviously get to grow and carry around a human being in our bodies; dads get invisible superpowers. The trick, however, to unlocking these super powers is you have to actually be a dad. And those dads who wear their red capes proudly – at least on the inside - rock. These super-powered dads are the ones who:

Listen to their child’s heartbeat through their mama’s belly and talk and sing to them through the walls of tissue and amniotic fluid.

Hold, sway, rub, hum, massage, breathe, breathe…and then…cry man tears of joy as they hold and kiss their son or daughter for the first time.

Swaddle & rock; kiss & hold; wipe & snap; help with feeding & burping and cleaning all sorts of bodily fluid they never knew could come out of such a tiny person.

Roll around and crawl with their babies; hold their babies between their legs and wrap their tiny fingers inside their big hands as they take their first steps.

Catch them when they tumble, kiss their bruises; wipe their tears & their snot.

Throw them up in the air; run through sprinklers; climb trees; shoulder-ride basketball dunks; roughhouse till they bleed... (Yet the kids always come back for more); and tickle them till they pee their pants.

Feed them; bathe them; clothe them; dig out hamburgers and elephants out of their ears; read bedtime stories – or make up their own; snuggle them; snore and drool with them.

Experiment together; build and fix things together; explore and discover the world together; teach their kids things moms never could or would even want to know about.

Work insane hours - and then work some more - so their kids can be fed, clothed, sheltered, and educated. They trade in their own dreams for new ones – their children.

Model respect and love for each other, especially their mother; point their children to God just by their own humble example.

Then when grandkids come along they magically transform into completely different men who suddenly don’t care so much about spilled milk, are capable of showing sympathy for pain, and spend frivolous amounts of money on their grandchildren for important things like candy and chocolate bars.

But, most importantly, it’s not really what these dads do with their kids or even for their kids that matters most.

They are here. With their children.

Not just as “assistant moms” as a friend of mine coined so well, but as real and interactive fathers for their children.

Erika Marie is a simple Catholic, Wife, and Mama. She relishes snuggles and free time with her family and enjoys reading, writing, blogging, and has a slightly obsessive addiction to creating Canva graphics. Enjoy more reflections by Erika at her personal simplemama blog.