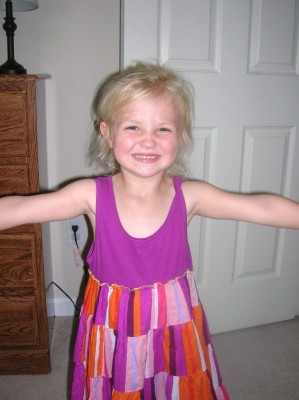 I was talking to a grandmother recently when I dropped my kids off at summer camp. She was lamenting the fact that her older granddaughter (not the preschool child that she was dropping off) was going into 6th grade. I thought it might be because the child had to leave her elementary school and go up to the middle school. Rather, I was told, it was because 6th grade is the grade when the girls get really mean (according to her granddaughter).

Instead of offering words of encouragement or support, I just stood there while my own memories of 6th grade came rushing back. Ouch! For the most part, there weren't many good memories! I had moved to a new town over my 5th grade summer, so I started at a new Catholic school that September.

I remember being panicked trying to find a seat at lunch the first week. I tried one table and I was told that, "Bonny (also a 6th grade girl) was the leader of the table, and she needed to decide if I could sit with them." I remember standing there in horror as Bonny sized me up. Thank God, Bonny must have liked what she saw, because I had a place to sit!

What if Bonny didn't like what she saw? I shutter at the thought (still...as a grown woman!).

The rest of that year was filled with girls who were my friend one minute and not the next...though I certainly don't remember doing anything to them!? I was shy, a good student, and not popular by any means. But, I survived with two good friends (I left Bonny's table a few weeks later)...so I guess I did relatively well!

But, it certainly wasn't fun. I told the grandmother that you couldn't pay me enough to be a kid again! "Amen," she said!

I thought of this as I watched my own children run around camp. At 6, 5, 3, 2, and 1, they are such fun ages right now! Their worlds are small, sheltered, and for the most part, happy and safe. They laugh a lot (and cry a lot when they do not get their way or are disappointed!), but they are spared a lot of heartache/confusion that I fear is coming as they get older.

The day ended with a good laugh. And, a new appreciation of the innocence of young children. We were at the mall with my good friend and her children. After playing at the indoor playground and having a snack in the food court, I informed my crew that I wanted everyone to use the restroom before we headed out.

As we were all filing into the ladies room, two kind women were headed out. They smiled at me and the children and held the door open wide so that I could fit the double stroller through. My daughter Cecilia, age 3-1/2, walked through the door and upon smelling some pleasant perfume, she said (very loudly), "YUM....! It smells like brown people in here."

The blood rushed to my face. Did she really just say that? Yes, the two women holding the door had beautiful dark skin, but really...had she said that out loud!?! I was mortified. We are always talking about how God made us all different...and all beautiful in His image and likeness...so, I know that she meant no harm...she was merely commenting on a scent and skin color in the same sentence. But...what did these women think!?

I turned to them as soon as I parked my big stroller out of the way (I knew that they must have heard). I was forming an apology in my head...and then I saw that they were laughing!!! Ahh...they were not angry! They didn't think less of me as a mother because my 3-year-old just spoke her mind. In fact, they seemed to be enjoying us as they waved goodbye to the kids.

What an innocent moment! In fact, it was kind of funny. Of course, I spoke to Cecilia (much like I told Gianna last year that we couldn't assume that a woman had a baby in her belly!). But, there was no harm done.

I thanked God for the grace (at least this time) to enjoy early childhood! Sometimes I get so caught up in the all the "work" of small children, that I fail to recognize all the qualities that made children especially attractive to Jesus!

I asked the Blessed Mother to please help my husband and I to raise up children with strong Christian character. And, I asked for the grace to have a better attitude about 6th grade (or whatever grade)...for surely, my children will still be the same precious people inside...they will just need support/guidance during some tough years!

I felt better about my conversation with the grandmother that morning.

But...you still couldn't pay me enough to be a 6th grader again!