Do No Harm: A Novel You Need to Read

If you have not heard of Fiorella de Maria before, let me introduce you to her: she's an up-and-coming author who has my attention. Her last book, Poor Banished Children, was one I loved last summer. 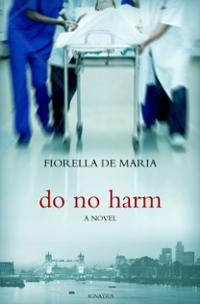 This summer, she has just released Do No Harm, about a British doctor who finds himself facing assault and battery charges after saving a patient's life.

Michael O'Brien, step aside. C.S. Lewis, move over. G.K. Chesterton...okay, let's not go overboard here. (Yes, she really is that good of a writer.)

Here's an excerpt of the book to get you started. And remember, when you buy through our links here at CatholicMom.com, you support the work we do (and we thank you for that!).

This excerpt is used with permission of the publisher.

"Do you remember anything of what happened?" asked Matthew. The casualty—a woman in early middle age—had been found unconscious on the concourse of a railway platform by a man who had just stepped off a train and had had the presence of mind to call an ambulance. The woman was now fully conscious, if a little confused to find herself amid the bright lights and noise of a busy hospital unit.

"I was running to catch the last train", she said, in the blank, disengaged tone of a person who has had a serious shock. "I think I must have lost my footing and hit my head on the way down. It was a bit slippery, I suppose."

"That would make sense."

"Yes, I think I must have knocked myself out. I can't really remember much until I was in the back of the ambulance." She paused. "I can't feel my fingers."

Matthew nodded. "It looks as though that arm's broken. Is it hurting?"

"It's just starting to."

"Well, we'll send you down for an X-ray now that we're happy your head's all in one piece."

"Oh, I know", she interrupted with sudden eagerness. "I've heard about that on Casualty."

Matthew smiled. He had a quiet loathing of medical dramas, which had slowly turned a generation of Brits into a nation of hypochondriacs. Once upon a time, a person had a headache; now they had a brain tumour because they had seen it on Casualty. "You're very lucky someone got out at your station and found you at this time of night. You would have frozen to death if you'd lain there until the morning."

The woman suddenly looked alarmed. "Can't I go home? My husband will be frantic."

"We can make a call for you if you like, but I'm afraid you'll have to stay in tonight for observation. Just a precaution because you knocked yourself out."

The woman was about to start protesting when a young man appeared at Dr Kemble's side. He had the fresh, eager look of a newly qualified doctor who slightly fancies himself as the romantic lead of one of the aforementioned prime-time medical dramas. "Sorry to disturb you", he put in breathlessly. "There's a bit of a situation over here. I wonder if you could possibly..."

"Yes, yes, just a moment." Matthew turned to one of the nurses. "Can you sort out this lady, please?" He nodded to the woman. "I'm afraid I've got to deal with an emergency. Nurse Deacon here will take care of you now."

"What is it, Harry?" demanded Matthew as he was propeled in the direction of another cubicle.

"What's so remarkable about that in a casualty unit?" Matthew asked impatiently. "You've dealt with them before; you know the procedure."

"Of course I do, Dr Kemble. I wouldn't have bothered you with it, but it's just a little complicated..."

Matthew and Harry arrived at the cubicle and the all-too-familiar scene. A young woman Matthew guessed in her mid to late twenties, lay unconscious in the bed, whilst another woman of around the same age sat at her side with that rather guilty air about her that so many accompanying friends and relatives had, as though she imagined herself to be personally responsible for the terrible predicament her companion was in. Matthew would barely have noted it if it had not jarred with her otherwise slick, professional demeanour. The companion did not belong by the side of a medical emergency somehow, so beautifully made up for an evidently different evening, not a carefully styled hair out of place. It only made the girl in the bed appear all the more pathetic: pale, disheveled and frail like a Victorian portrait of a consumptive waif. There was the offensive smell of alcohol and stale vomit all around her, with traces of it evident around the girl's mouth and on the tips of her hair where her body had rebeled against being poisoned before she had finally passed out. A sorry sight indeed, but a common one.

"I called the ambulance as soon as I found her", said the companion, standing up when she became aware of the doctors' presence. "I wasn't really sure what else to do. I kind of went into autopilot."

"You did the right thing", Matthew reassured her. "Have you any idea how long ago she poisoned herself?"

"No, I"ve no idea. She was already out of it when I found her. There was sick everywhere."

"Right, well, we'd better get to work. Do you know what she took?"

Harry intervened. "She's diabetic. According to her friend here, it looks as though she took an overdose of insulin, but there were other things. She found the remains of a bottle of vodka and empty packets of other pills—Tamazepan, paracetamol. It looks as though she just took anything she could lay her hands on."

"Right. She'll need a gastric washout." Matthew turned to the companion again. "You—erm—you might want to step outside. It can be rather distressing to watch."

"That's the problem, Dr Kemble", said Harry awkwardly. "This lady says she has a living will."

"I'm sorry, Doctor", the woman said. "I probably shouldn't have even called an ambulance. I just kind of acted on impulse. I thought maybe you could make her comfortable or something." She handed Matthew the advance directive, a crisp, formal legal document, neatly printed on good-quality paper. "She was always very adamant she would not want treatment in a situation like this; she's never liked doctors or hospitals. Sorry."

"No offence", promised Matthew. "What people say and what they want, though..."

"The living will is quite specific, Doctor. She showed it to me when she made the thing."

Why does she have to sound so relentlessly cold? thought Matthew, then felt immediately guilty for thinking something so harsh as she was almost certainly in shock. What people failed to consider in situations like this was quite how traumatic it was to stumble unsuspectingly over a friend in such a horrendous state, and the woman might well not have had time to take in the enormity of what had happened.

"Would you excuse us a moment, please?" Matthew took Harry's arm and pushed him out of the cubicle. "If I didn't know better, I'd think you were passing the buck."

"Maybe we can get someone to look at this", suggested Harry. "There might be some loophole."

"There's no time. We've no idea how long it is since she took the overdose. She could be dead by the time we've finished looking for a way to cover our backs."

"These things are legally binding. We were warned about this. If you go against her living will, you could end up in really quite a lot of trouble."

"Yes, and if I don't, she will be dead by the morning. She's hardly made it easy for us as it is."

Matthew stood at the entrance of the cubicle, staring at the piece of paper that was causing all the trouble. The fact was that it was the first time he had ever been presented with such a thing, and he felt an unfamiliar sense of confusion overtaking him. The practice of medicine held very few surprises for a man his age, all those endless little disasters that brought men and women to this place, helpless and frightened. After a few years, it all became quite mundane and perfunctory, but this was different; this was repugnantly, terrifyingly different.

Matthew stepped forward and glanced through the gap between the curtains at the woman lying in the bed, happily unaware of his dilemma. He could had the case back to Harry now, and no one would be any the wiser. They would keep the woman comfortable as her friend had requested, and in the morning, they would cover her in a sheet and take her to the mortuary. It was hardly as though he had never lost a patient before, and if she were really that determined, she might well be the type to make suicide attempt after suicide attempt until she was finally successful...

A second later, Matthew was glaring in Harry's direction, and he knew with the guilt of age and experience that he was going to raise his voice, not because he had anything particular against the man, not for that matter because he was actually angry, but because he would rather come across as the most monstrous tyrant in the patriarchal hegemony than admit he had considered abandoning a patient for a single second. "If she were my daughter, I would want someone to treat her. I wouldn't care about this piece of paper."

"She's not your daughter. You need to be a bit more objective."

Matthew wondered afterwards—and he was to have plenty of time to wonder—whether he would have hesitated just a little while longer if he had not felt so irritated at being lectured by a kid he had lectured himself not so long ago. "I did not train as a doctor so that I could stand back and leave a vulnerable patient to die. I'm sorry you do not feel the same way."

Harry looked away in evident embarrassment. "There is a small question of the patient's rights."

Matthew climbed down from his invisible podium. He knew he sounded like something out of a campaigning leaflet, but it was almost becoming a habit. "I don't have time to have an argument with you, Harry. Call a nurse. I'll need an orogastric tube..."

Buy the book and support CatholicMom.com with your purchase.