Taking the plunge: Lessons in Swimming 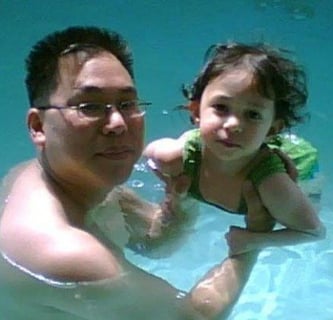 Taking the plunge: Lessons in Swimming

It's no surprise then that she took to water like a fish. She would literally spend hours in the wading pool and would have to be pried away even when her lips were deep purple or she was shivering so much that she couldn't even speak. Being in the water brought her to life in a way that I am sure others have seen the young delight.

But there was something even more preternatural and excessive in her draw to the water. It was insatiable. When she was 3 years old she was a flower girl in my sister-in-law's wedding. She was so excited! Literally, I remember that she started dancing (or to be exact, she gleefully hopped up and down dancing like a toddler) the moment she stepped onto the dance floor. She did not stop moving until several hours later at the end of the reception when she literally collapsed on a pile of clothes in the bridal party room. Her call to the water is like that. She gives in completely and it gives her such joy and life.

Reflecting upon her introduction to water I also began to think about its spiritual and baptismal nature, especially as I worked with people preparing to enter the Catholic church through the RCIA. In the beginning, the water was some place more exciting to be. The idea that there were other considerations, like holding your breath, or understanding sinking or floating, or the difference between being underwater or on land never crossed her mind. She was already drawn to the water and her mind was trying to keep up.

I recall vividly taking her to the community pool for the first time. Floatation jackets were offered to young kids who couldn't swim. She didn't want to wear it, but after pointing out to her that other kids were wearing them and that I couldn't hold her all the time, she reluctantly agreed. This was followed by several unrestrained moments of glee, jumping and splashing and floating in the pool. 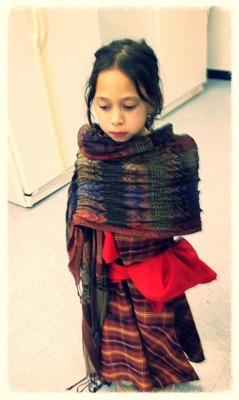 For safety reasons, every 20 minutes or so the lifeguard blows a whistle for everyone to get out of the activity pool. This being our first time, we had to learn to comply with much reluctance. My daughter, not wanting to stop, dragged me across the way to the Olympic lap pool and jumped in while we waited for the other pool to re-open in 10 minutes or so. When it was finally time to return to the other pool, she told me she didn't need the life-jacket anymore. "Are you sure?" I asked, knowing that my daughter had never been fully submerged or held her breath underwater. She was resolutely confident, so I let her take the jacket off.

She jumped in and sank like a stone. She immediately popped back up with the strangest look of bewilderment on her face. She had swallowed some water and I began to explain to her how you can't breathe water and the beginnings of holding your breath. It was a bit too much. "Do you want to put the jacket back on until you learn to hold your breath?" Reluctantly, she complied.

Baptism, whether infant baptism or perhaps even more especially with adult baptism is a lot like that moment. We have so much to say and explain about the sacrament, about the significance of water, about the breath of life. But there is nothing that really takes the place of real transformation in the face of the intimacy of the sacramental experience. (Imagine for example explaining Confirmation, separated by several years from that first life-changing experience instead of several moments after being immersed and then cloaked in a life jacket of white?)

Since that time, being in the pool with my daughter has been such a blessed "God-moment." From that early age, I realized that there is all manner of instruction and example I can set for my child. But I realized more importantly, she has to take her own breaths. For me, I have to trust God who surrounds us, like the water in the pool and is with us, like the breath within us. And we have to cooperate with that grace and sustenance. But also, very much like my daughter, we should be completely at home with and drawn to that experience.

Since that time, my daughter has progressed in swimming. She is now capable of swimming on her own. I remember going through a phase where she would still climb on me and hold on. At those moments I truly felt the weight of being a parent. She depends on me for support, but after a while I too have to depend on something else for support as well. Something else holds me up so that I can hold her.

Nowadays though, she still has further to go in her swimming knowledge and skills. She still needs to learn more formal strokes and to work on her diving down to depths, for example. But I still very much delight in swimming WITH her. Often we joke around underwater, trying to talk to each other. Or even more delightful is the time we spend underwater simply looking at each other and waving to each other. It's as if we know there is this other world where we are truly aware of each other (and our limitations) because we are surrounded by something else so much bigger and pervasive, yet so unassuming as water. It is both a special place (like church) and a sacred relationship between us (and God).

I look forward to swimming deeper and deeper into our faith life together. She will enter the catechumenate soon. The comfort and assumptions she has developed accompanying me to mass since she's learned to swim will be similarly challenged and will transform her. I can't wait to welcome her to the deep end, to see and wave to her. I can't wait to see her face at what she will see.

When Life Gets You Down, Just Keep on Swimming!
Read
Greetings from Gracieland: Just Keep Swimming
Read
Finding God in the Swimming Pool
Read