Parents of the In Between Times: A Durable Peace in a World Better than This

For Catholics, we live in the in-between times: the times in which we have experienced the Reign of God as already begun but not yet fully realized. We find ourselves inside such a time now. As I write this, we are between Rosh Hashanah (the Jewish New Year) and Yom Kippur (the Day of Atonement). We are between the sweet promise of the new bearing fruit and the need to voice our shortcomings and atone for our sins. Or as my Jewish family puts it: so that “what is written on Rosh Hashanah shall be sealed on Yom Kippur."

We are also in-between the times wrestling with Syria to uphold the moral principle prohibiting the use of chemical weapons or unleashing the ungodly dogs of war. Pope Francis called for a worldwide day of fasting and prayer for peace during his Sunday, September 1 address. Catholic Bishops in the U.S. followed suit by encouraging U.S. Catholics to do the same on Saturday, September 7th.

Prayer is of inestimable value, though it is perhaps not the most common diplomatic tool to employ in foreign relations. Practically speaking, the power of prayer and fasting comes from the depth of a practicing community as it draws upon and looks to God as the ultimate source of life and goodness. If a community or an individual is not typically well practiced in this type of radical simplicity, such powerful rituals and gestures may seem less efficacious and more formulaic mumbo-jumbo, like rune-like rosaries or quietly lit candles. 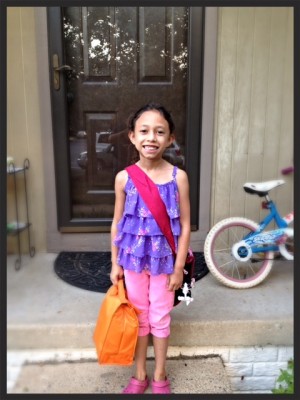 But I also think on some basic level parents are quite comfortable or at least well practiced at offering up their most ordinary lives in the face of the unknown with a sense of hope in the future. Our children bear out that kind of promise even as they may also be the victims of a less than ideal future. But I am sure that our parental responsibilities and obligations are often informed by a sense of sacrifice and a belief that our work toward that end is a meaningful struggle or contribution towards a life better than this.

So whether or not you personally join the worldwide gesture of prayer and fasting, have a strong or informed view of where you'd like things to go in Syria, are aware that millions of Jews worldwide are wrestling in their own ways with what the future holds, as are literally many other religious communities and minorities in a myriad of places around the world underneath the radar of U.S. foreign policy, we should join our best and simplest utterances to God over our futures and over our foods with the struggle for a more durable peace amongst the nations and peoples. So that what has been written for the years of our children may be sealed not by what mankind can take and destroy, but what God can redeem and make whole.

For myself, I am comforted by these in-between times when I am reminded how often this sentiment was formed in me every day in Catholic elementary school when we made our Morning Offering to Jesus through the Immaculate Heart of Mary, in which I offered "my prayers, works, joys, and sufferings of this day in union with the Holy Sacrifice of the Mass throughout the world...and for all the intentions of the Bishops, Apostles of Prayer, and in particular for those recommended by the Holy Father..."

I still live in a world formed and conformed to such words. I pray and hunger for a more durable peace. And I feed my child on such hope in these in-between times.