“Let the Little Children Come to Me”: Discipling & Disciplining Young Children During Mass 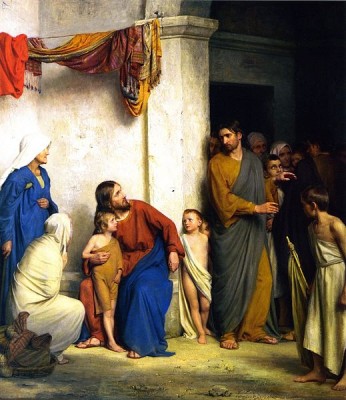 Did you know that the word “discipline” comes from “disciple”? The real purpose of discipling our children is to disciple them, bring them along side to teach them the things of life.  Jesus modeled this to us throughout His time on earth with His apostles and disciples.  The Holy Mass is a wonderful time to practice this very parenting skill, modeling Christ in His own home.

Our beautiful parish is definitely a “pro-life” parish.  There are infants, toddlers, and  young children aboundingly.  They bring much laughter, joy, excitement and love to the entire parish.  But sometimes, more often than not, they bring much noise and distraction to the Holy Mass, not only to the people in the pews, but to the priest as well.  Many are too young to know any better or to even be taught proper Mass behavior, but on the same hand, many are old enough to be taught how to behave during the Holy Mass and why they should.

Before the age of three, most little ones are all about mobility and finding their place in the world.  So when they begin to get fidgety and trying out their new-found vocal chords, the most respectful thing to do is to just take them out.  It’s just a stage of life that parents have to sacrifice hearing the homily for the sake of everyone around , as well as the priest trying to speak over the boisterous toddler.

But from about three years most children can be taught how to behave in Mass.  It isn’t something that is grasped on one or two Sundays, but something to be worked on until mastered.  Some may ask why?  Why does my little one need to be taught to behave in Mass at such an early age?  The answer, succinctly, is because it is Holy Mass.  So the first lesson at hand is our own understanding of the sanctity of this sacrificial celebration.  Our main purpose for attendance is to give glory and honor to God Almighty.  We need to remember we are going there to worship Him, not for our own desires.  Quite often we find though, that when we put God in His proper place in our lives, He fills our hearts, minds and needs.  Many times we hear, “I just wasn’t being fed?”  Well, what did you bring to the table?  So when we understand why we are going to Mass in the first place, we can understand why our children should be taught that for one hour on Sunday morning, (and hopefully more often later), we direct our attention to God.

Another reason to begin teaching our children proper behavior in Mass is to begin teaching them respect for others.  When we tell a four-year-old that they are disturbing the lady with the big hat sitting behind us, usually, they will return to the desired behavior.  (Of course, teaching respect begins at home!)

So just how can you really teach a three or four year old to behave in Holy Mass?  Start with looking down the road.  What do you want them to do during Mass when they are six or seven and preparing for their First Holy Communion?  Do you want them having a snack, a drink, or coloring a picture?  If not, leave those things at home.  What you probably want them doing in a few years is following along in the missalette, standing, sitting and kneeling at the appropriate times and singing along with the congregation.  Most three-year-olds are not going to be very excited about the missalette in the pew back, so get them one of their own.  There are a number of wonderful books for children about the Holy Mass.  Pick up one or two, leave them in the car and keep them special for Mass only.  While different parts of the Mass are taking place that are shown in the book, point it out to your youngster.  Help him enter into the Mass just as we are invited to do.  Point out different things in the church; the crucifix, the altar, the tabernacle, the windows, the statues, explaining everything several times and then asking your child questions about them.  (Obviously, question time should be after Mass.) My children are all adults, preparing to have children of their own now, but they all remember when we told them to look for the angels and saints during the ringing of the bells.  We explained that the angels and saints were there with us giving glory to God.  So when they heard those bells, their eyes shot up.  When they were really little we often wondered if they could really see them.

One other tip is... Practice!  If you have the opportunity, EWTN broadcasts the Holy Mass at 11:00am CST on the television.  Practice sitting still, standing, and kneeling with you children.  You may only be able to keep their attention for ten minutes, but that is ten minutes of modeling a behavior they will know how to do the next Sunday.  Another time for practice is in the car on the way to Mass.  Ask them to show you how they will sit during Holy Mass for five minutes.  Give them something to listen or look for while at church.  This gives them a mission.  Just make sure it is something that draws them into the Mass.  We offered a quarter to the child that could answer questions we came up with during the homily.  This helped them to really listen.  (Of course, this was at an older age, six plus or so.)

We all have bad days so be patient and except that there may be days that the five year old still needs to be taken out.  Just don’t let the back of the church become a place of play.  It is a place to have a talking-to and a reminder of why the family is at Mass.

Don’t worry, very soon, much sooner than you may think, all those little ones become adults and you fill an entire pew between your family and the newly extended family.  It is such a joyful experience.  On those days that they all have to go to the bathroom at different times, can’t sit still, argue over who witnessed angels and who didn’t, try to look forward to the kids that will love the Lord their God with all their hearts, all their souls and all their minds.  The Catechism of the Catholic Church, paragraph 2223 says, “Parents have the first responsibility for the education of their children.”  Beginning with the education of the worship of God seems like a good place to start.

Why Disciplining Children is Crucial Even Though No One Likes It
Read
“Children’s Liturgy” During Mass?
Read
Dr. Ray on Discipline
Read