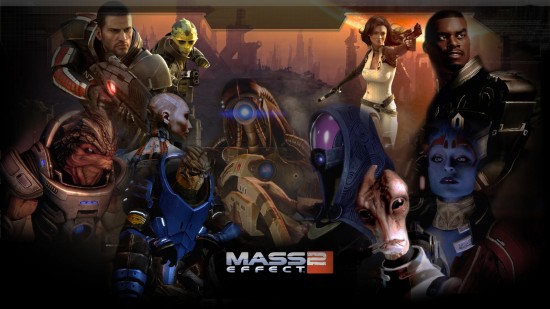 Shepard's back, and he brought some friends. 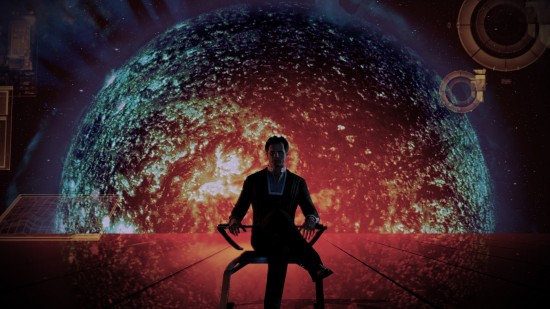 The leader of Cerberus, voiced by Martin Sheen, has to have a dying sun behind his chair. Because it just looks cool.

In Mass Effect, Commander Shepard became the first human SpecOps enforcer of the Interstellar UN, stopped another one who went rogue, and has saved the universe from a threat fifty thousand years in the making from The Reapers, an enemy who make Star Trek's Borg look like LEGO men.

After being sent out to get proof that the Reapers are out there, Shepard's ship is destroyed. His crew is scattered. He's lost his status, and must ally himself with a rogue organization called Cerberus in order to stop the next great threat from the Reaper menace.

When a colony is attacked by the Reapers, and the colonists are captured, Shepard must assemble a team of interstellar toughs for a mission that is almost guaranteed suicide. But when the rest of the galaxy wants to close their eyes and hope the Reapers go away, only Shepard and his ragtag team of rogues are willing to go and find out what the Reapers have planned next. 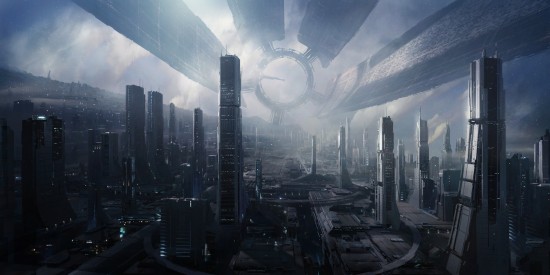 This isn't actually a planet, this is a space station.

Like the last Mass Effect, the sequel has the interaction of a role playing game and the action components of first person shooter.  The FPS aspect is the same as almost every other shooter – point and click.  There are elements in there like superpowers (telekinesis, and other variants) and varying types of ammo.  And unlike the last game, you can't draw your weapon at will but only in specifically defined areas.

All of the gameplay elements have been improved.  Remember in the last game, when you build your commander Shepard? You can do that again, but you don't have to – all you need is to import your save from the last game, and you can bring in your level, your choices, and, in essence, the universe you created.

You can even improve the person of Shepard by giving him/her biotic or mechanical implants.  And, instead of feeding into your “rogue” or “paragon” meter with skill points you could use to improve your abilities, that is solely based on whether you make choices that make you a rogue or a paragon.

The galaxy map that makes you travel from place to place? Improved. Armor? Customizable.  There is also a nice bit of planet exploration and resource mining. 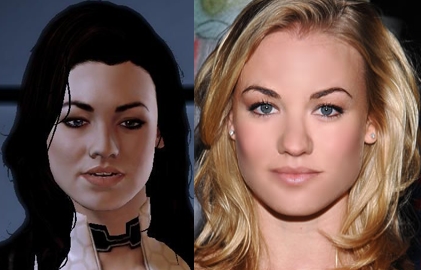 Tell me this isn't bad for graphics. One's the character, the other's the voice actor.

The graphics are … you know what, go out and look up stills from Mass Effect 2.  They are beautiful and breathtaking.  It’s artwork.

The character design? Beautiful and detailed.  The graphics are not yet a the point where we can see individual pores in someone's face, but that's pretty much something that's only happened this year.  I actually thought that the graphics peaked at Mass Effect 2. They didn't, but darn is it close.

The planets need some work, but most ships and space stations are nice.  And the space scenes are beautiful. And the cut scenes? Oh heck yes.

The score? Vastly improved.  I could see myself getting a copy of the soundtrack this time. 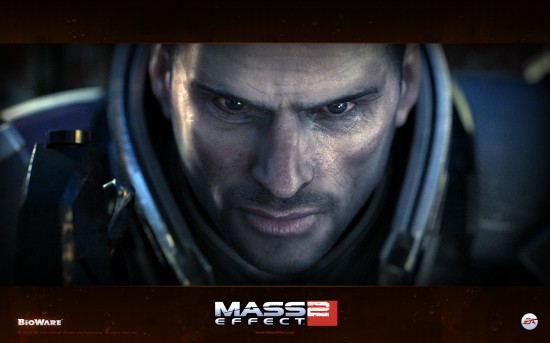 How's this for close-up graphics?

This is a coin toss. Why? Well, on the one hand, this game, like its predecessor, is rated M for Mature for a reason.

Let's start with things you cannot change in this game.

And that brings us back to the choices you get to make in the game. Shepard can be a paragon or a renegade, or you can try a balancing act that tries to please everyone. There are romance options in the game that can conclude in a sex scene (this time, no nudity) or you can be single.

You still have the Asari from the first game, though there are no instances of female Asari making advances on a female Shepard. The Geth, here, are less of a problem – you don't see anyone impaled on metal spikes.  However, when you see why the Reapers and their minions are kidnapping whole colonies … I won't spoil the surprise, but darn, this is not something you want your kids seeing (I should mention that it isn't graphic in any way, but just the suggestion itself makes this creepier than a horror film).

Mid-level. And for the exact same reason as the last game. While it’s fun to go through the game and see all of the various ways it can turn out, and the dozen different ways to get the job done, going through the exact same opening (which has little variation) time and time again is a sure way to cut down on repeated plays.  And on a first run-through, it gets tiring to run all the way from one part of a mission to another.

Something I didn't discuss earlier, but must be mentioned, are the characters. All of the characters here are rich and vividly drawn.  They have backstories and background, and they're all interesting. Even one party member who is essentially a robot, has a lot of good lines-- and what other science fiction story has a an artificial intelligence that can quote the bible chapter and verse.  And the way Shepard helps his crew (or not) during their personal storyline missions greatly affects character development, so does each individual dialogue option.

Maybe because I'm a writer, I enjoyed the witty style of dialogue and execution of the story itself. This is a deep, involving story with great characters. Believe it or not, sex aside, profanity aside, this game is very Catholic. I know of few other games that involve death, resurrection, forgiveness, and redemption.

And you are in control of how this all plays out. Do you allow your party to commit cold-blooded murder? Talk them down and let them forgive who hurt them? Do you berate them for their past sins, or pull them along as they seek redemption?

And the voice acting is spectacular.  But this is running a little long.

My rating: If you're an adult who plays video games, you should have bought this already. Or, you should buy the collected Mass Effect trilogy that's out now.