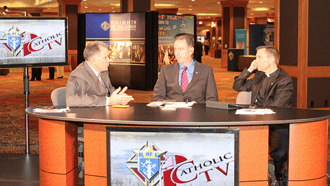 WATERTOWN, MA (August 1, 2013) – The Knights of Columbus will hold its 131st annual International Supreme Convention on Tuesday, August 6, 2013, at the JW Marriott Hotel in San Antonio, Texas. The CatholicTV Network will provide live coverage of the event on August 6, 2013 as part of the “All Knights, All Day” event.

Father Robert Reed, Kevin Nelson and Peter Sonski will provide live event commentary. Visit www.CatholicTV.com/Knights-of-Columbus where videos of this year’s events will be added to the archive of past Supreme Conventions.

The Knights of Columbus was founded in 1882 by Father Michael McGivney, a parish priest in New Haven, Connecticut. The organization has now grown to 1.8 million members worldwide, who are heavily committed to charity. During the past year, Knights donated more than $167.5 million and more than 70 million hours of service to charitable causes.

CatholicTV will broadcast the Opening Mass (10:30 AM ET), Opening Session (2:15 PM ET) and States Dinner with a keynote address from Cardinal Sean O’Malley, O.F.M. Cap. of Boston, (10:05 PM ET)  live from the Knights of Columbus Supreme Convention on August 6, 2013.

In addition, The CatholicTV Network will air the following on August 6, 2013:

Knights of Columbus Vocation to Marriage, presents the teaching of the Church regarding Christian marriage and family: airs 12:30PM ET

Beyond Borders, a documentary showing the relationship between the Knights of Columbus and the Vatican from the time of Pope Benedict XV to Pope Benedict XVI, airs 1:20 PM ET

Knights of Columbus Vocation of the Religious Life for Men, designed for those discerning a call to the priesthood, this film highlights the lives of priests: airs 5:20PM ET

Father Michael McGivney, chronicles the life of this holy and hard-working priest through his boyhood and priesthood to his death in 1890 at age 38. Although his life was short, his impact on the world was enormous: airs 7:42PM ET

Learn more about the KofC at www.kofc.org. Follow the 131st International Convention live on Twitter at #KofCSA13.